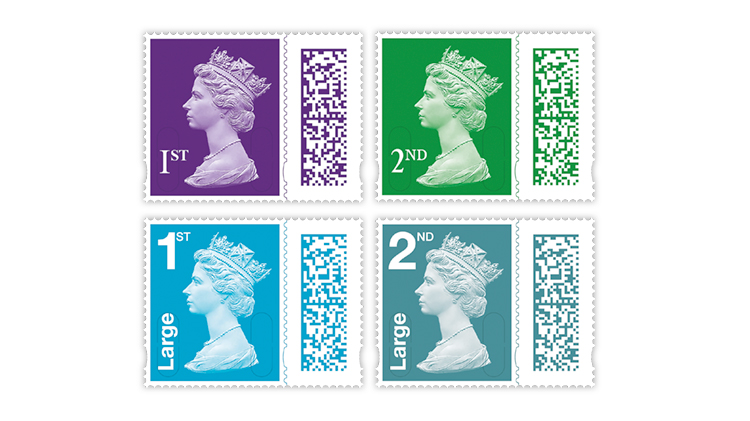 Four new British Queen Elizabeth II definitive stamps with integrated bar codes were issued Feb. 1. The bar code is printed in the same color as each stamp and is separated by a simulated wavy-line die cut. The bar code must remain intact for the stamp to

On Feb. 1, Royal Mail, the postal service of Great Britain, issued four Queen Elizabeth II definitive stamps with a new feature: a bar code that appears along the right side of the stamp.

According to an announcement on the Royal Mail website, the new bar code is an “integral part of the stamp and must remain intact for the stamp to be valid.”

The bar code is printed in the same color as each stamp and is separated by a simulated wavy-line die cut.

The iconic left-facing portrait of the queen is based on Arnold Machin’s famous sculpture that first appeared on a British definitive in 1967. The design has changed little since that time.

In a Feb. 1 press release, Royal Mail said the introduction of bar codes on its definitive stamps was part of an “extensive and ongoing modernisation drive and will allow the unique barcodes to facilitate operational efficiencies, enable the introduction of added security features and pave the way for innovative services for customers.”

Customers who have the Royal Mail app on their smartphone can scan the bar code on the stamp to view a video featuring Shaun the Sheep. (This title character of a television series for children was previously featured on a British stamp issued in 2014, Scott 3259.)

“The video is the first in a series of planned videos to be released during 2022 that will allow customers sending stamped mail to choose which video the recipient can see when they receive an item of mail,” Royal Mail said.

Definitive and Christmas stamps without a bar code will be valid until Jan. 31, 2023, according to Royal Mail.

Stamps without bar codes can be exchanged for the new stamps with bar codes through what Royal Mail calls its “Swap Out” plan.

“The ‘Swap Out’ scheme will open on 31 March 2022. Customers will be able send unused stamps via a Freepost address. Forms will be available via a variety of channels, including: local Customer Service Points; the Royal Mail website and via our Customer Experience team,” Royal Mail said.

Additional details will be announced at a later date, according to Royal Mail.

The new bar-coded Queen Elizabeth II stamps may be ordered from Royal Mail.