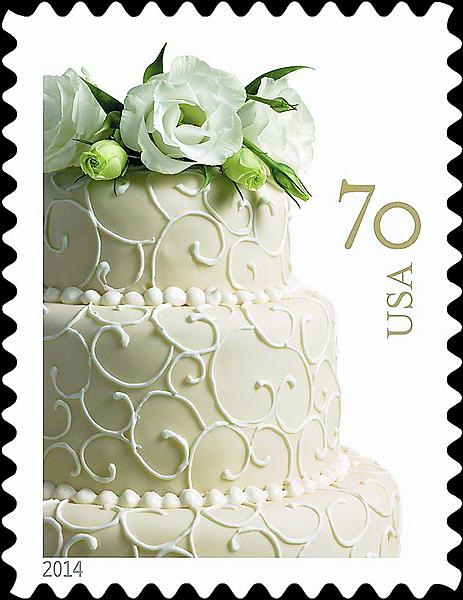 The United States Postal Service issued its fifth version of the Wedding Cake stamp Feb. 22 in Mesa, Ariz., and nationwide.

A first-day ceremony was scheduled to take place at 11:30 a.m. in the main lobby of the Mesa Convention Center, 263 N. Center St., during the Aripex stamp show.

The new stamp is denominated 70¢ to fulfill the first-class rate for mail weighing more than 1 ounce and up to 2 ounces that went into effect Jan. 26.

This rate often applies to wedding invitations sent with RSVP cards and other enclosures.

In addition to the new denomination, the 70¢ stamp is inscribed with a 2014 year date.

The decorated three-tiered wedding cake topped with white roses with green stems was designed and created by pastry chef Peter Brett of Virginia, who specializes in wedding cakes, and photographed by Renee Comet of Washington, D.C.

Comet’s photographs have appeared on other U.S. stamps as well, including two wedding stamps: the Wedding Rings first issued in 2009 (Scott 4397) and the Wedding Roses stamp issued in 2011 (4520).

The tradition of serving some type of cake or bread at wedding feasts dates back to ancient Rome. Later, in medieval England, small cakes were stacked into a tower that the wedding couple was expected to kiss over top off.

Today’s multitiered wedding cakes with white frosting evolved from those featured at royal weddings in the 19th century.

The U.S. Postal Service contracted with stamp printer Sennett Security Products to produce 30 million 70¢ Wedding Cake stamps in panes of 20, the same quantity as produced for the previous variety.

Press sheets will not be offered for the 70¢ Wedding Cake stamp.

Technical details and first-day cancel ordering information for the new 70¢ Wedding Cake stamp are included in the text below.

Collectors requesting first-day cancels are encouraged to purchase their own stamps and affix them to envelopes. The first-day cover envelopes should be addressed for return (a removable label may be used), and mailed in a larger envelope addressed to Wedding Cake Stamp, Postmaster, Main Post Office, 135 N. Center St., Mesa, AZ 85201-9998. Requests for first-day cancels must be postmarked by April 23.

The Postal Service’s uncacheted first-day cover for the Wedding Cake stamp is USPS item No. 587516 at $1.14.