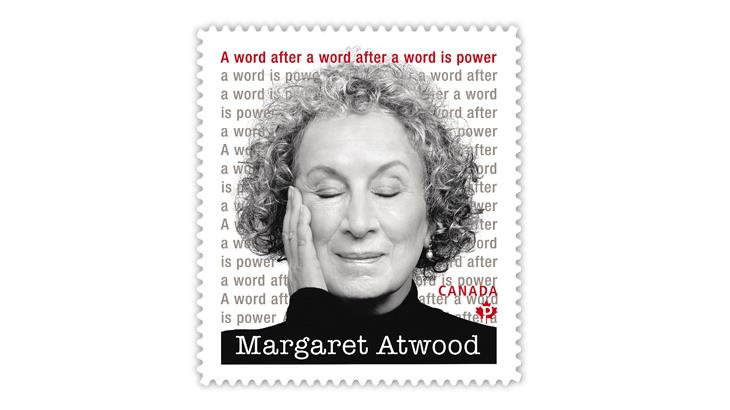 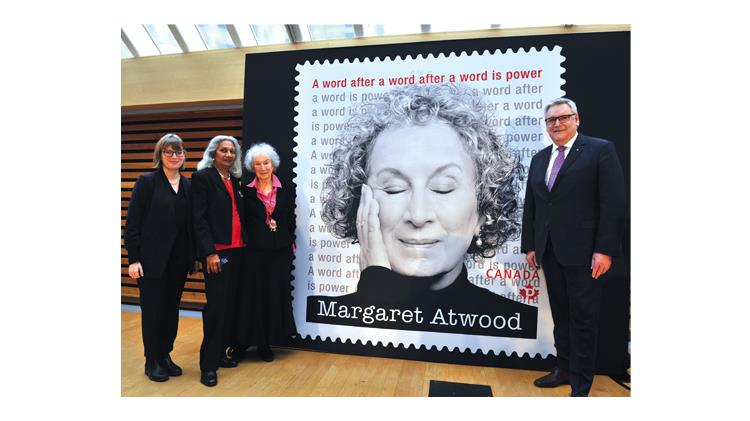 Margaret Atwood participated in the unveiling of the stamp honoring her Nov. 25 at the Toronto Reference Library. Shown from left are Sarah Polley, actress, writer, director, producer and political activist; Ceta Ramkhalawansingh, national chair of the Wo
Previous
Next

Canada Post issued a stamp in recognition of author Margaret Atwood on Nov. 25.

“With more than 50 books to her credit, many awards and international acclaim,” Canada Post said, “Margaret Atwood is perhaps Canada’s most successful, acclaimed and admired writer.”

The nondenominated, permanent-rate (currently 92¢) stamp was issued in a booklet of 10. The “P” inside a maple leaf representing permanent rate appears at the bottom right, just above text giving the name of the author.

“Born in Ottawa in 1939,” Canada Post said in a press release, “the best-selling writer burst onto the literary scene in the early 1960s with two award-winning collections of poetry, Double Persephone and The Circle Game. In 1969, she established herself as a serious writer of fiction with her first novel, The Edible Woman.”

Among her many awards in the decades since, Atwood has won two Booker prizes, the Arthur C. Clarke award and a lifetime achievement award from the National Book Critics Circle.

“Her work has sold millions of copies worldwide, has been translated into over 30 languages, and has been adapted into feature films, documentaries, and critically acclaimed television series,” Canada Post said.

Several of her books have been adapted for the screen, including The Handmaid’s Tale, which earned eight Emmys after its first season in 2017, and is now slated for a fifth season. Atwood’s work largely revolves around various themes including gender and identity, religion and myth, and politics.

The Toronto Reference Library hosted an unveiling of the stamp on the day of issue. Actress, writer, director, producer and political activist Sarah Polley, who adapted Atwood’s 1996 novel Alias Grace into a 2017 television series of the same name, attended the event.

The background of the stamp features the lines “A word after a word after a word is power” from Atwood’s poem Spelling. The black-and-white photo of Atwood in the foreground was taken by Ruven Afanador in 2017.

In addition to the stamp, Canada Post also offers an official first-day cover with a drawing by Atwood titled Neither fish nor flesh on the front and a portrait of her taken by Yousuf Karsh on the back.

Canada Post explained in a press release that the cancel is “a raven silhouette symbolizing Atwood’s interest in birds.”