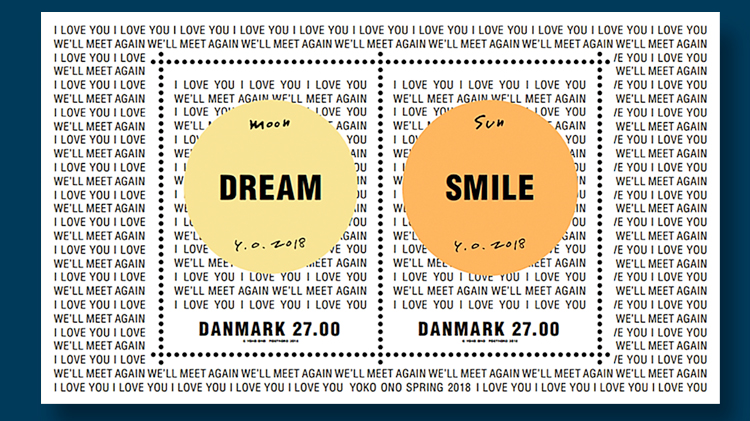 Yoko Ono designed two stamps for Denmark in conjunction with her exhibition at a Copenhagen art gallery. The stamps were issued Jan. 2 in a souvenir sheet.

The words “Dream” and “Smile” are featured prominently on the first stamps designed by Yoko Ono, an artist, musician, activist and the widow of John Lennon.

The designs also represent the sun and the moon, respectively.

These Danish stamps were issued Jan. 2 in a souvenir sheet of two. According to Postnord, the souvenir sheet is an “extension” of the “Yoko Ono: Transmission” exhibition at the Kunsthal Charlottenborg art gallery in Copenhagen. The exhibition opened Oct. 12, 2017, and runs through Feb. 18.

The gallery described the exhibition as exploring “the unique ways in which the artist transmits her profound messages of artistic philosophy and peace through numerous channels to reach people throughout the World.”

Each stamp bears a denomination of 27 krone, paying the new rate for international letters up to 100 grams. The rate went into effect Jan. 1.

The stamps are se-tenant (side-by-side) in the sheet.

On the stamp on the left, “Dream” is written on a symbolic yellow moon. The word “moon” is at the top of the circle and “Y.O. [Yoko Ono] 2018” at the bottom. Similarly, the stamp on the right features “Smile” on an orange sun.

The phrases “I Love You” and “We’ll Meet Again” are repeated in the background of the two stamp designs and in the selvage of the souvenir sheet.

According to the publicity image from Postnord, the last line in the selvage of the souvenir sheet also includes “Yoko Ono Spring 2018.”

An announcement about the souvenir sheet on Ono’s website included 10 questions with the artist about postage stamps and letters.

One question asked why she wanted to design stamps.

Ono replied: “Because I was always interested in stamps and how they looked, and whose face is on them. Usually it’s somebody very famous.”

She was also asked about the messages conveyed by the words on the stamps and in the selvage.

As for the “Dream, moon” and “Smile, sun” printed on the stamps, she said: “The message I want to give them is energy and power and this is the way I send a warm wish for it.”

Ono explained that the phrases “We will meet again” and “I love you” referred to whenever she thought about a person “we are meeting in the air.”