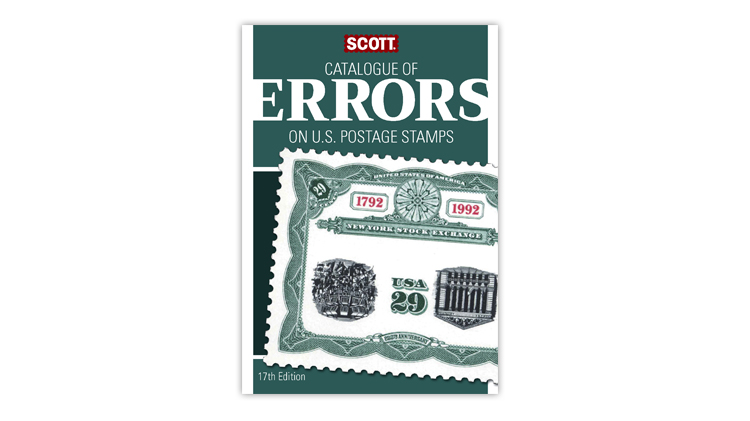 The 17th edition of the Scott Catalogue of Errors on U.S. Postage Stamps will debut in March.

Continuing the tradition of offering a catalog devoted to United States errors, we present the 17th edition of the Scott Catalogue of Errors on U.S. Postage Stamps. Stephen R. Datz, a highly respected collector and specialist of errors for half a century, was the author of the previous edition of the Scott U.S. Errors catalog. Datz, who resided in Colorado, died in 2015, at age 71.

The new 17th edition includes a multitude of enhancements. One of the most substantial is the number of new illustrations shown for the first time. Our editorial team contacted numerous error collectors, dealers and specialists, who either provided images we needed or directed us to others who could do so.

A handful of new images of color-omitted stamped envelopes also are included. Among these is the 1989 25¢ Love stamped envelope with the bright blue omitted (Scott U616b). Three colors were used to print this envelope, dark red for the word “love” and the heart, bright blue for the underline and part of the exclamation point, and pale blue for the lines on the background of the entire envelope.

In addition to new images, numerous values have been updated. Overall, a significant number of errors changed in value since the previous Scott U.S. Errors catalog was published in 2014.

Specific values for imperforate plate-number coil strips have replaced previously dashed entries (—). A dash indicates that insufficient valuing information exists. These strips are valued only in the Scott U.S. Errors catalog. Additional listings with dashes have been updated with values throughout the catalog.

Overall, imperforate errors have held their catalog values quite well. Conversely, there has been a softening of values for color-omitted errors.

Among the color-omitted errors, the possibly unique pane of 15 of the Celebrate the Century 1900s stamps with the red engraving omitted on the Gibson Girl stamp (Scott 3182p) increased from $2,530 to $3,000.

Dozens of new listings have been added in this edition, including the 2013 Four Flags coil stamps with no horizontal slits between the coil rolls (Scott 4777b). One of these items is an eye-catching coil error from its multi-roll format. Footnotes and other helpful information have been reviewed and updated accordingly.

If you have an image of a stamp error that is not pictured in this catalog, we would appreciate receiving an image for our files and for potential inclusion in a future edition. Updates or suggestions also are welcome. Send an email to jbigalke@amosmedia.com or write to P.O. Box 4129, Sidney, OH 45365-4129.

We hope you enjoy the 17th edition of the Scott Catalogue of Errors on U.S. Postage Stamps, available online at the Amos Advantage website.