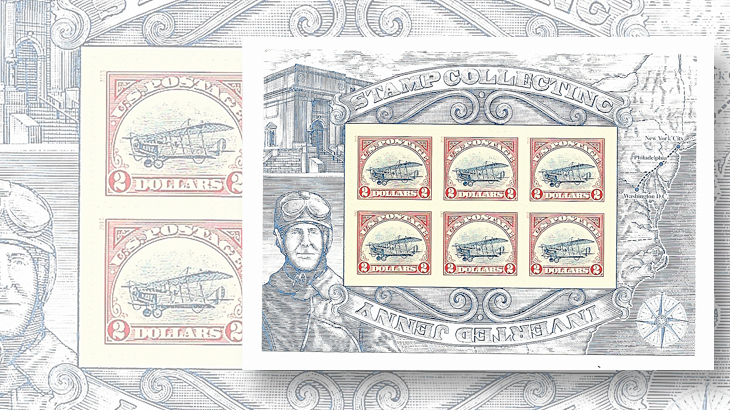 Arizona collector Gregg A. Hopkins Sr. reports finding one pane of the upright variety of the $2 Jenny Invert stamp. The stamp pane was part of an order received in the mail from the U.S. Postal Service.

A collector in Arizona reports that his recent mail order of stamps from the United States Postal Service included one pane of the intentionally created upright variety of the $2 Jenny Invert stamp.

The find increases Linn’s tally of panes found to 24 out of the 100 six-stamp variety panes that the U.S. Postal Service said were printed and randomly seeded into the entire print run of normal stamps.

The normal version of the $2 postage stamps show the Jenny biplane in the center of the design flying upside down.

The scarce variety shows the plane flying right side up on each of the six stamps.

Every pane sold is wrapped in blind packaging, so no one can identify the variety panes before purchasing them.

The new discovery report comes from Gregg A. Hopkins Sr., a collector, researcher and exhibitor who has been working on a comprehensive exhibit of the 2013 $2 Jenny Invert issue (Scott 4806).

Hopkins told Linn’s that since the Postal Service’s surprise announcement Oct. 2, 2013, that the 100 variety panes had been intentionally printed and randomly distributed, he has been working with another collector to buy quantities of the individually wrapped panes of the Jenny Invert stamps with the hope of finding the scarce variety.

According to Hopkins, the two men purchased more than 1,000 panes over the course of the past 20 months.

“Starting in 2015, it became more and more difficult to find the $2 Jenny stamps at post offices, so we resorted to ordering them from the Fulfillment Center in Kansas City,” Hopkins said.

In an order of 10 panes placed June 2 and received less than a week later, Hopkins found the coveted pane with the planes flying right side up.

Calculating the full print run of more than 2.2 million panes, and adjusting for panes set aside by the Postal Service for archive and merchandising purposes, the odds of purchasing one of the 100 panes printed with the intentional variety is estimated by Linn’s to be 1 in 19,000.

Each pane of the upright variety comes with a stuffer card that invites the finder to call the Postal Service directly with details, and to claim a congratulatory certificate signed by the postmaster general.

After he called to report his find, Hopkins was told he was the 19th registered finder in the Postal Service’s records.

Linn’s tally of 24 panes found includes examples certified by philatelic grading services but not reported to the Postal Service.

It also includes three panes randomly given away at the end of 2014 to three different USPS mail order customers.

That giveaway was later described by the Postal Service as not having been fully approved before it took place.

Some full panes of the upright variety have been reported selling for more than $50,000 at public auction and in private sales.

Hopkins told Linn’s he plans to debut his 10-frame display class exhibit of the $2 Jenny Invert issue at the 2016 Aripex stamp show in Mesa, Ariz.