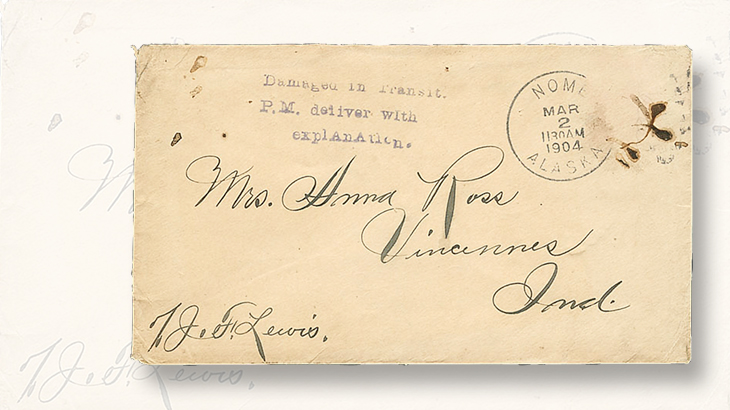 This March 1904 cover from Alaska to Indiana got wet enough that the stamp fell off. The handstamp reads “Damaged in Transit,” likely in the snow and slush of winter’s end that made transport of anything in Alaska difficult at this time.

In the April 4, 2016, U.S. Stamp Notes column, I also featured a 1904 cover sent from Alaska to Vincennes, Ind., that presented an unsolved puzzle. I am revisiting the subject here.

The cover was stamped when it was canceled March 2, 1904, but somewhere along the route south the envelope got wet and the stamp fell off.

The cover arrived in Vincennes with the handstamped message, “Damaged in Transit. P.M. deliver with explanation.” If that explanation was in writing, it did not survive with the cover.

In the April 2016 column, I quoted a letter from Hal Vogel in which he described the perils that Alaska mail might be subject to: dog sleds in the snow and slush; partially frozen waterways, and generally primitive conditions.

I recently received a letter from Bob Collins of Westlake, Ohio, that shines additional light on the subject.

A longtime collector of Alaska postal history and an exhibitor of that material for many years, Collins wrote: “It is also useful to realize that Alaska is huge; covering if superimposed on a map of the ‘lower 48’ all or most of the states of North Dakota, South Dakota, Nebraska, Kansas, Minnesota, Wisconsin, Missouri, Iowa and Illinois.”

While we will likely never know the precise travails of that cover, we now have a pretty good idea of the problems it might have encountered.