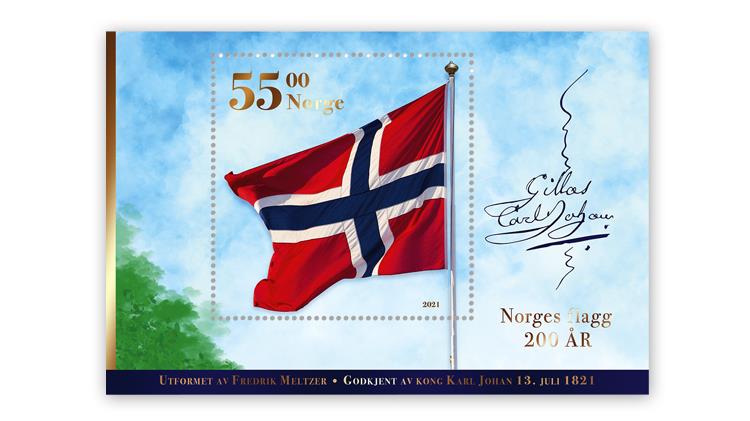 Norway’s Posten issued a souvenir sheet Nov. 5 to commemorate the 200th anniversary of the Norwegian flag. Although it was adopted in 1821, universal use of the flag did not come until 1905. 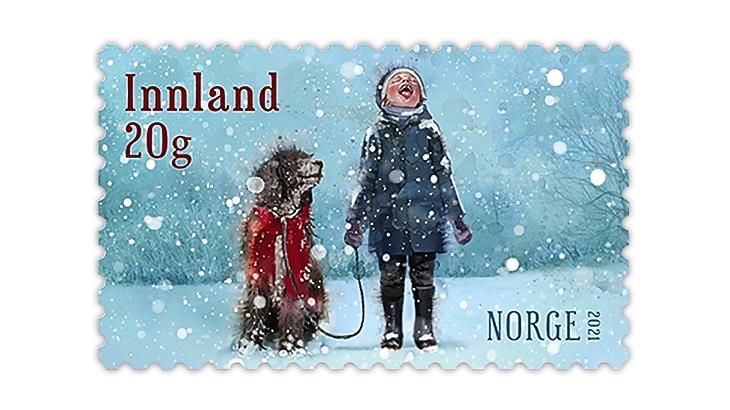 One of the two Christmas stamps issued by Norway Nov. 5 shows the simple pleasure of two good friends taking time to enjoy a snowy day. 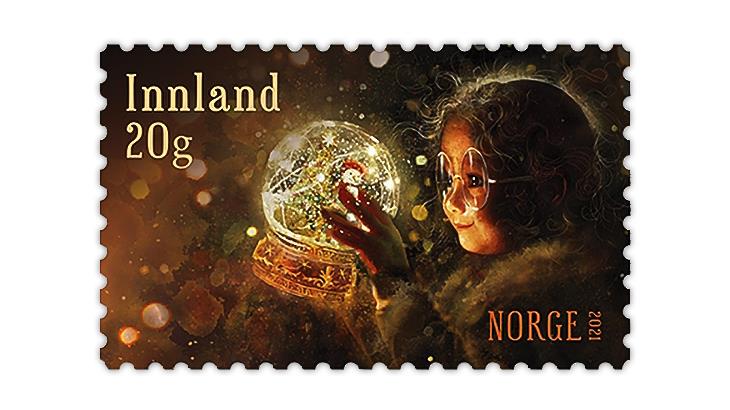 Norway’s other new Christmas stamp shows a girl fascinated by a snow globe. These two nondenominated Christmas stamps can be used for any domestic letter not exceeding 20 grams.
Previous
Next

Norway’s post office, Posten, issued the final three stamps of its 2021 stamp program on Nov. 5. A souvenir sheet includes one stamp celebrating the 200th anniversary of Norway’s flag, while the other two stamps depict seasonal illustrations for Christmas.

The 55-krone stamp in the souvenir sheet features the red, white and blue flag of Norway waving against a blue sky with white clouds.

The flag, which shows a blue cross outlined in white against a red background, was designed by Frederik Meltzer, a Norwegian member of parliament in the 1820s.

A press release about the new issue said Meltzer’s original design “represented a middle ground between the former connection with Denmark and the new one with Sweden.”

Although adopted 200 years ago in 1821, approval for universal use of the flag in Norway did not come until 1905 because of this union between Norway and Sweden.

Among the other Norwegian stamps showing the flag is a nondenominated stamp issued in a souvenir sheet of one on May 8, 2020, to celebrate 75 years of peace. Designed by Martin Morck, this stamp shows King Haakon arriving in Oslo on June 7, 1945 (Scott 1897).

These nondenominated stamps can be used for any domestic letter not exceeding 20 grams. They are sold in a 180k booklet of 10 (five of each design).

One stamp shows a boy with a dog on a leash. Both wear coats as the snow falls around them and blurs the scenery in the background. The dog looks adoringly at the child, whose head is upturned to catch snowflakes.

The other stamp portrays the same kind of adoring look, but this time the look comes from the girl staring at a brightly lit snow globe. Like the illustration on the other stamp, the background is blurred. This gives even more attention to the subjects.

“When I was working on the Christmas stamps,” Aisato said, “I remembered a dog I had when I was a child, which used to leap around in the snow. And I was always totally fascinated by shining Christmas baubles.”

Camilla Kvien Jensen designed the two Christmas stamps and the souvenir sheet for the flag’s bicentenary.

All of these new issues can be found at the Posten website. Posten also has options for presentation packs, collector sets and first-day covers.