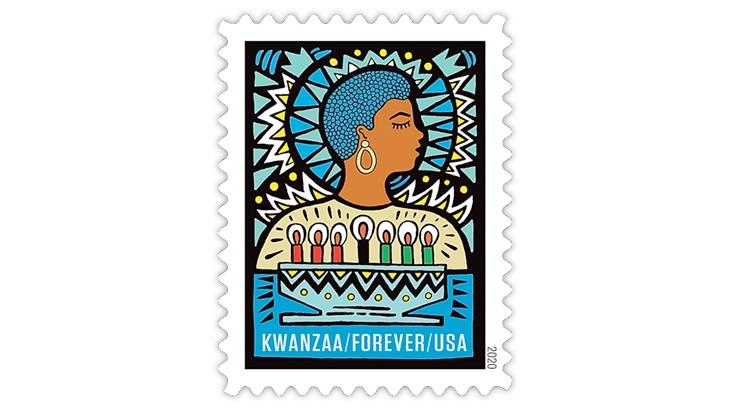 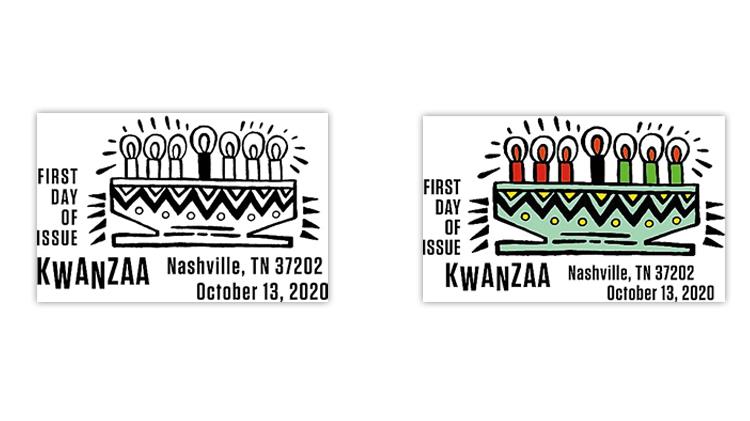 Two postmarks celebrate the issue date of the new Kwanzaa stamp. The postmark designs show the kinara from the postage stamp illustration.
Previous
Next

On Oct. 13, the United States Postal Service will add a new stamp celebrating Kwanzaa to its growing list of 2020 holiday issues.

“With this new stamp, the Postal Service continues its tradition of celebrating Kwanzaa,” the Postal Service said in its Sept. 10 Postal Bulletin announcement. “The annual Pan-African holiday, which takes place over seven days from December 26 to January 1, brings family, community, and culture together for many African Americans.

“The stamp design features the face of a woman in profile with her eyes closed. Her contemplative demeanor signifies the ways in which observers of Kwanzaa reflect on the seven founding principles, the Nguzo Saba, and their role in everyday life. A kinara (candleholder) with the seven lit candles (mishumaa saba) sits in front of her. Cool tones evoke a sense of inner peace and vibrant design elements give the artwork a celebratory feel.”

The Kwanzaa holiday was developed in 1966 and draws on African traditions. The name Kwanzaa is derived from a phrase that means “first fruits” in Swahili.

“Created in 1966 during the height of the Black Freedom Movement, Kwanzaa was conceived as a unifying holiday during initiatives to end racial oppression in the United States,” according to the Postal Service.

Banknote Corporation of America is printing the stamps and processing them in panes of 20.

According to Pippins’ website, her work has been featured in Essence magazine, The New York Times, and O: The Oprah Magazine.

The artist’s most recent book, We Inspire Me, described as “a one-of-a-kind handbook for doers and makers looking to expand and nourish their creative community,” was published by Chronicle Books in 2018.

The Kwanzaa forever stamp is Pippins’ first design for the U.S. Postal Service.

“A big dream became reality,” she wrote on Instagram in July, when the stamp was first announced. “Creating art for a United States Postal Stamp was a career bucket list wish for me, two years ago it happened — and here we are. Get ready for Kwanzaa 2020!”

The most recent Kwanzaa stamp was issued Oct. 10, 2018, with a design by Floyd Cooper of a family gathered together for the holiday. The 2018 Kwanzaa stamp is still offered by the Postal Service through some of its retail outlets.

As this issue of Linn’s was being prepared for publication, the Postal Service had not announced plans for an online event welcoming the Kwanzaa forever stamp. All in-person USPS first-day ceremonies have been suspended since March as a response to the ongoing COVID-19 pandemic.

The Postal Service is offering first-day covers for the Kwanzaa issue, with pictorial postmarks in black or in color.

Both postmarks reproduce the kinara shown in the new stamp illustration.

The Kwanzaa stamp is the third winter holiday issue for 2020. The Holiday Delights set of four, reported in the Sept. 14 Linn’s Stamp News, has an issue date of Sept. 24.

A Hanukkah forever stamp will be issued Oct. 6. Details were reported in the Sept. 28 Linn’s.

The traditional Christmas forever stamp, Our Lady of Guapulo, will be issued Oct. 20.