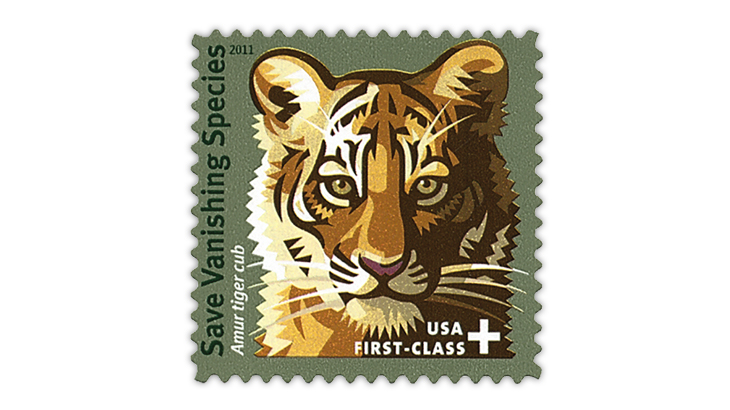 The United States nondenominated (58¢+17¢) Save Vanishing Species semipostal stamp was issued in 2011. The Biden administration’s proposed federal budget for fiscal year 2023 would prevent the U.S. Postal Service from destroying any of the remaining stamp

When the United States Postal Service issued its Save Vanishing Species semipostal stamp (Scott B4) in 2011, the plan was for the stamp to remain on sale until September 2018.

Congress, which had authorized the stamp, had another idea.

It wants the stamps, which feature an Amur tiger cub, to remain on sale, as one senator put it, until “every last stamp is sold.”

That wish, expressed by Sen. Rob Portman, R-Ohio, was echoed by President Joe Biden in his proposed federal budget for fiscal year 2023, which begins Oct. 1, 2022.

As previous federal budgets have stated in 2019, 2020 and 2021, the proposed 2023 budget contains a requirement that the stamps remain on sale through the government’s upcoming fiscal year.

According to a Portman press release published March 2, 2021, there were “approximately 45 million” of the 100 million stamps printed still in post offices as of that time.

The Biden administration’s 2023 budget states that the USPS “may not destroy, and shall continue to offer for sale” the remaining stamps, which now sell for 75 cents each.

Initially sold for 55¢ each, the stamps have raised more than $6.3 million for wildlife efforts worldwide, according to Portman.

Today the postal value of Save Vanishing Species semipostal stamps includes 58¢ for first-class postage and a surcharge of 17¢ for conservation efforts.

The surcharge is given to the U.S. Fish and Wildlife Service to support five multinational species conservation funds. These funds protect tigers, rhinoceroses, Asian and African elephants, marine turtles and great apes.

The USPS shortened the name to the “Save Vanishing Species Stamps.”

Save Vanishing Species semipostal to go off sale Dec. 31