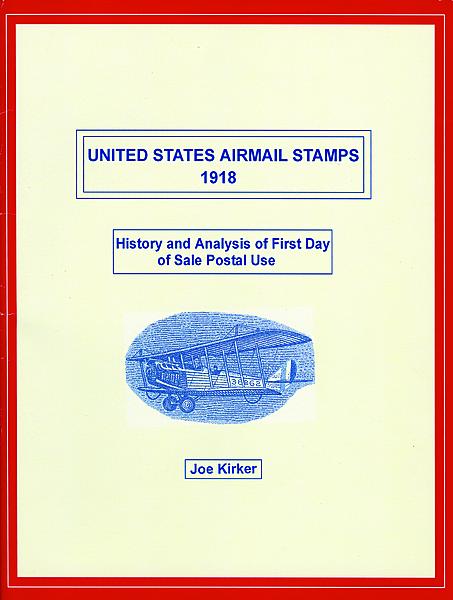 Collectors of the trio of United States 1918 Jenny airmail stamps (Scott C1-C3) will be pleased with a new monograph titled United States Airmail Stamps 1918 History and Analysis of First Day of Sale Postal Use.

Longtime airmail collector and specialist Joe Kirker has brought together years of work documenting the first days of postal use of these fascinating stamps.

In a letter to me that Kirker included with his study, he explained his rationale:

“For nearly five decades I have had a passionate interest in the U.S. 1918 Jenny airmails and have accumulated literally thousands of articles, tear sheets, catalogs, and all other printed matter covering those stamps.

“This monograph is the first consolidated effort to present and discuss material which has entered the marketplace offered as First Days of Use for the three Jenny airmails.”

Kirker opens his study with an important clarification: “One subject which has seen very little press by any airmail enthusiast has been in depth discussion of first days of use. That is not the dates in 1918 when the airmail rates took effect, but those specific days when the issues were first available for sale to the general public.”

In the lead section, Kirker traces the history of the recorded first days of use of the stamps.

He does this by showing selected covers and the corresponding auction catalogs in which they first appeared.

Remarkably, it was not until 1956 that first-day covers of the three stamps appeared for sale in an Irwin Heiman catalog.

Specialists will want to pay particular attention to the section titled “Analysis of Recorded First Day of Use Material.”

Eighteen different covers, most shown in color, are reviewed.

Included in Kirker’s analysis are a number of fake or questionable items that would fool less experienced collectors.

Kirker explains that expertization by “competent authorities using all modern methods should be performed for any item re-entering the marketplace.”

If you collect the postal history of the 1918 Jenny airmail stamps, you ought to add this work to your reference library.

It is available for $25 postpaid to a U.S. address, and $30 postpaid to foreign destinations.

For additional information, Kirker may be reached via e-mail at jenny1918joe@aol.com.