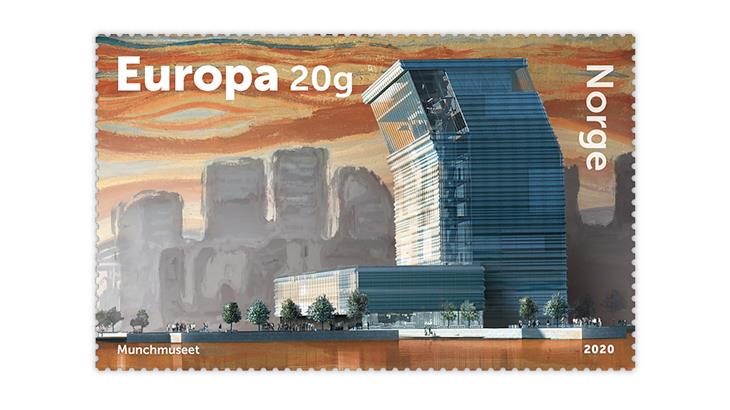 Figure 1. A recent stamp from Norway shows stamp designer Enzo Finger’s illustration of the new Munch Museum in Oslo. Posten Norge calls the building “an attraction in itself.” The museum is scheduled to open later this year. 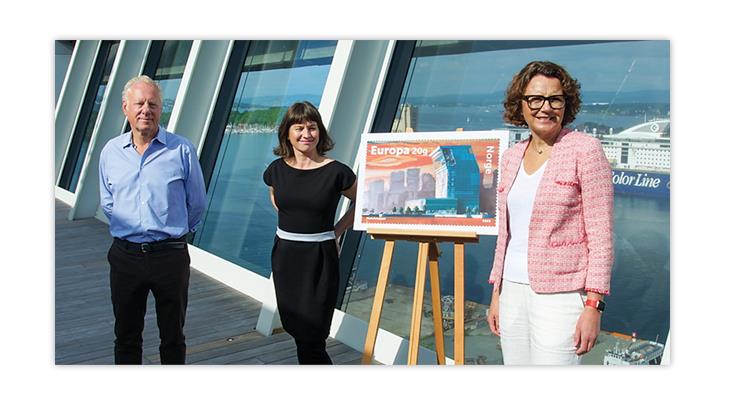 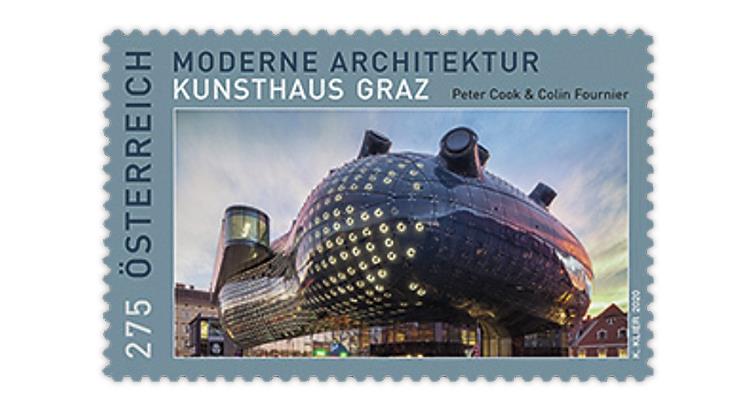 Figure 3. The latest stamp in the Modern Architecture in Austria series depicts the contemporary art museum in Graz. One of the building’s nicknames is “friendly alien.” 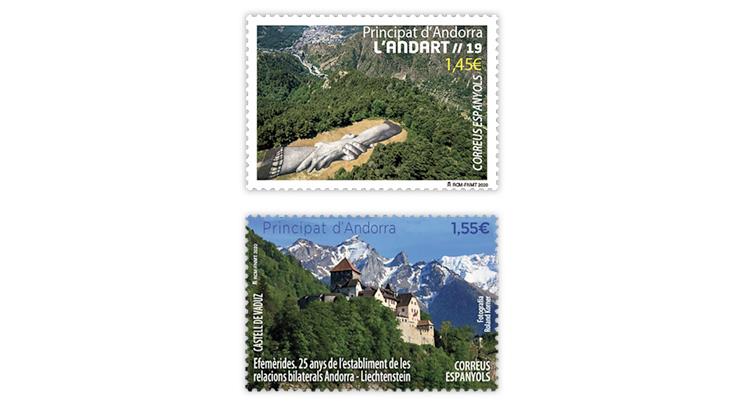 Figure 4. A mural in the mountains and Vaduz Castle are shown on recent Spanish Andorra stamps highlighting its 2019 Land Art biennial and the 25th anniversary of diplomatic relations with Liechtenstein. 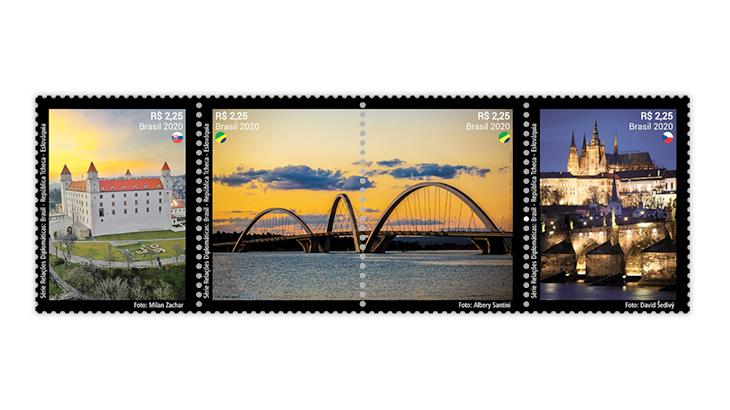 Figure 5. A bridge in Brasilia, Brazil, connects Slovakia’s Bratislava Castle and the Czech Republic’s Prague Castle on this se-tenant strip of four commemorating Brazil’s diplomatic relations with the two nations.
Previous
Next

Norway issued a stamp June 12 honoring a new museum that will house the works of Norwegian artist Edvard Munch (1863-1944).

The stamp design by Enzo Finger not only depicts the unconventional architecture of this museum in Oslo, it also reflects the artist.

“I have tried to capture the spirit, both of the building and Munch’s art,” Finger said in the press release from Posten Norge (Norway’s postal administration) announcing the stamp.

The press release also mentioned the design of the museum: “The special building in Bjorvika in Oslo is loved by many and disliked by some — much like Munch’s art was when he lived. The building is an attraction in itself, and with Oslo Municipality’s fantastic Munch collection with 28,000 works of art, it will be a world-class cultural institution.”

The museum is scheduled to open later this year.

Spanish architect Juan Herreros and his firm Estudio Herreros won the competition to design the museum in 2008.

The museum’s website said: “Herreros’s winning architectural proposal is based on the idea of a tower-shaped museum, where the main functions are organized vertically. Sixty metres [almost 200 feet] in height, clad in recycled, perforated aluminum panels of varying degrees of translucency, and with its distinctively leaning top section, the tower is a highly visible landmark from all sides.”

Construction on the museum began in 2015 and in 2016 Crown Princess Mette-Marit laid the foundation stone.

The stamp is nondenominated, paying the basic rate for letters weighing up to 20 grams sent to other countries in Europe (currently 26 krone).

Joh. Enschede of the Netherlands printed the commemorative in sheets of 50.

Another art museum with an unusual design is featured on the latest stamp in Austria’s Modern Architecture series. The series began in 2011.

The new €2.75 stamp issued Aug. 20 depicts the contemporary art museum Kunsthaus Graz. Opened in 1960, the museum displays art from the 1960s to the present.

A website of local museums describes the exterior: “The Kunsthaus has been called a baby hippo, sea slug, porcupine, whale and a ‘Friendly Alien’ — this last name having been coined by Colin Fournier, one of its two architects. For him, the Kunsthaus is a biomorphic, indefinable something, a hybrid, strange and familiar at the same time …”

The other architect was Peter Cook, who was knighted by Queen Elizabeth II in 2007.

The building also includes what the website calls a BIX media facade designed by Jan and Tim Edler of the realities:united architects of Berlin, Germany.

The website said of the facade: “Since its opening in 2003, it has served both artists and curators in communicating and interacting with the urban space. Through the changing programme it plays, the BIX emphasises the organically formed nature of the building.”

Karin Klier designed the stamp. Joh. Enschede printed it by offset in sheets of 50.

A new stamp issued June 30 by Spain’s Correos for Spanish Andorra showcases one of the works of the Andorra Land Art international biennial. Land art combines sculpture, architecture and nature.

Land art biennials were presented in 2015, 2017 and 2019. Pere Moles, the curator of the 2019 event, said on the website: “Two editions ago, the Biennial was born to take art out of the museums and bring it within everyone’s reach, to explore its (and our) relationship with nature and to create a new contemporary landscape.”

The theme of the 2019 biennial was shinrin-yoku, a Japanese practice also known as forest bathing. The website of the Japan National Tourism Organization defined it as “the simple and therapeutic act of spending time in a forest.”

Forty artists participated in the 2019 event, and the entry by French artist Saype is pictured on the €1.45 stamp.

This mural of interlaced hands was the second installation in Saype’s global Beyond Walls project.

The artist’s website said: “Following on from the launch of its Beyond Walls project at the Champ de Mars in Paris in June 2019, Saype decided to stop over in Andorra for the International Land Art Biennial. Saype wanted a lyrical, calm and green place which he found at the level of the lake of Engolaster. Surrounded by France and Spain and landlocked in the European Union, without being a member, this atypical place, which presents sumptuous landscapes was then an ideal place to host the second stage of the Beyond Walls project.”

Architecture from many centuries ago is featured on another recent Spanish Andorra stamp. Issued Aug. 9, this €1.55 commemorative marks the 25th anniversary of the establishment of bilateral relations between the Principality of Andorra and Liechtenstein.

The stamp reproduces a photograph of Vaduz Castle. Located in the Alps overlooking Liechtenstein’s capital, Vaduz, the castle serves as the official residence of the prince of Liechtenstein.

According to the principality’s official tourism website, “It is thought that the castle was constructed as a fortress as early as the 12th century, before living quarters were added in 1287. Vaduz Castle is first mentioned in documents dating back to 1322.”

Brazil also used architecture to illustrate stamps honoring its diplomatic relations with the Czech Republic and Slovakia, which began 100 years ago with Czechoslovakia. The four se-tenant (side-by-side) 2.25-real stamps picture two castles and a bridge.

The castles, Bratislava Castle in Slovakia and Prague Castle in the Czech Republic, are shown at dawn and dusk, respectively, on the stamps on the left and right in the strip.

A sunset photograph of JK (Juscelino Kubitschek) Bridge over Paranoa Lake in Brasília, Brazil, is shown across two stamps in the center of the strip. Brazil’s Correos describes the photograph of the bridge as connecting the two castles.

The Brazilian Mint printed the four stamps by offset in sheets of 24 (six strips of four).