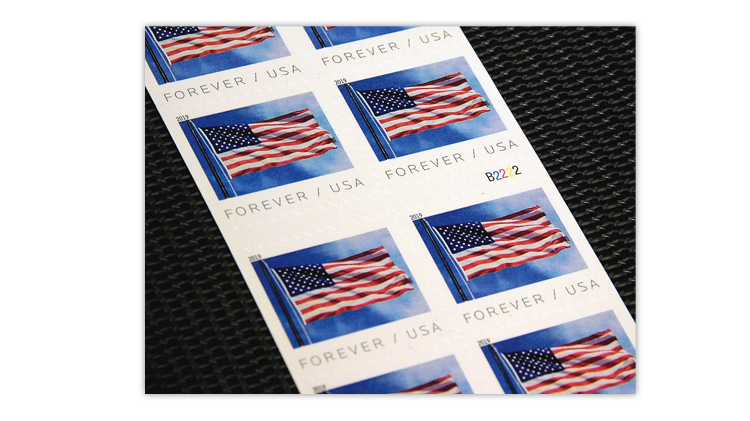 Collectors have reported a new plate number on the United States 2019 Flag forever stamp printed by Banknote Corporation of America. The original issue was printed with plate No. B1111. The new printing shows plate No. B2222.

Just weeks after a new plate number was reported on the Ashton Potter printing of the United States 2019 Flag double sided pane of 20 forever stamps (Scott 5344), another new variety of the 2019 Flag issue has surfaced.

The Banknote Corporation of America printing of the same Flag design (Scott 5345) has turned up with plate No. B2222 printed in the pane’s selvage peel-off strip.

The example pictured here was sent to Linn’s by reader Richard A. Hoehne.

When first issued, the double-sided panes (which the U.S. Postal Service describes as a booklet) from the BCA printing showed plate No. B1111.

As reported in the Oct. 12 Linn’s, the Ashton Potter pane was recently discovered with plate No. P2222, differing from the P1111 found on the initial printing.

When asked about the new BCA plate number variety, Betts confirmed that the plate number change was made because of a new printing, but gave no indication of any other production change.

An initial examination by Linn’s and Scott catalog editors revealed no significant differences between the two plate number varieties from Banknote Corporation.

When the Flag stamps were issued in 2019, the Postal Service identified the paper type for the BCA pane printing as “Phosphor Tagged Paper, Block Tagged” indicating a luminescent coating applied on the stamps, but not on the label found on one side of the pane.

The new printing appears to use the same block tagging.

The Flag forever stamp was initially issued Jan. 27, 2019, in four varieties consisting of a coil stamp and a double-sided pane from both of the Postal Service’s two contract printers.

Like all stamps fulfilling the first-class letter rate (and other stamps beyond the lowest denominations), the Flag stamps are printed with a luminescent tagging that glows under shortwave ultraviolet light.

As reported in the Oct. 12 article, an examination under shortwave UV light showed a noticeable difference between the two Ashton Potter printings. The stamps on the P2222 pane examined by Linn’s appeared to glow brighter than the 2019 stamps with plate P1111.