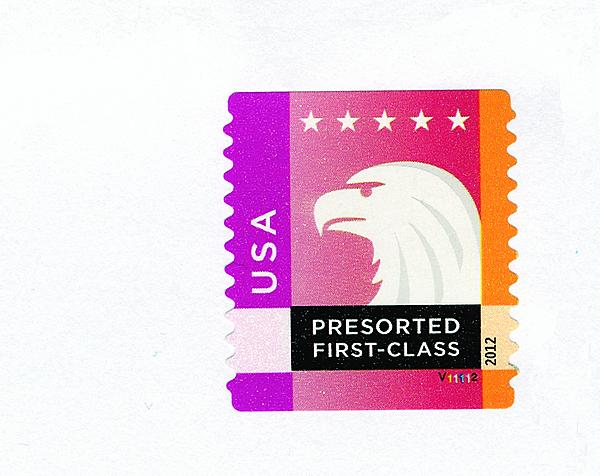 The Plate Number Coil Collectors Club first reported the new number as being discovered in September.

Pictured nearby is a single on-cover used example received by Linn’s in October. The new plate number is V11112. It is shown here digitally cropped from the cover.

U.S. Postal Service spokesman Mark Saunders told Linn’s, “The printer used an ‘alternative paper supplier’ for the most recent shipment of Spectrum Eagle thus they made the plate number change.”

He added that the new plate number was shipped from the printer to the Postal Service in June.

The change of just one number, instead of the whole line of numbers, was noticed by collectors.

Saunders said, “We worked with the printer who requested since there was a paper change to change one single digit so they could monitor any production issues.”

Other stamp printers have changed all of the digits when a paper change took place.

Also noted was the letter prefix used on the new printing.

Avery Dennison’s stamp printing division was acquired by CCL Label in 2013, and the printer prefix changed from “V” to “C.”

“When printer CCL began a reprint of the nondenominated First-Class presort Spectrum Eagle coil stamps earlier this year — for delivery beginning in June — they had just been qualified for a new PSA laminate process which did not impact the papers (face stock and liner) or inks, just the adhesive and laminate construction,” USPS spokeswoman Leisha Palmore-Drummond further explained.

“As a simple reprint, we did not ask them to change plate numbers, nor change the printer prefix from ‘V’ to ‘C,’ but they asked us for permission to change a single digit so that they (and we) could monitor quality throughout the system.

“We agreed, and therefore, only a single digit was changed on the latest reprint.”

There is not a specific USPS item number assigned for the new plate number.

The six Spectrum Eagle stamps were issued Jan. 3, 2012, with plate number V11111 the first to be reported. The stamps all have the same eagle design but with different color backgrounds of green, blue green, blue, red violet, brown orange and yellow orange. The plate number appears on the red violet stamp.

The plate number interval is every 30th stamp in the coil.