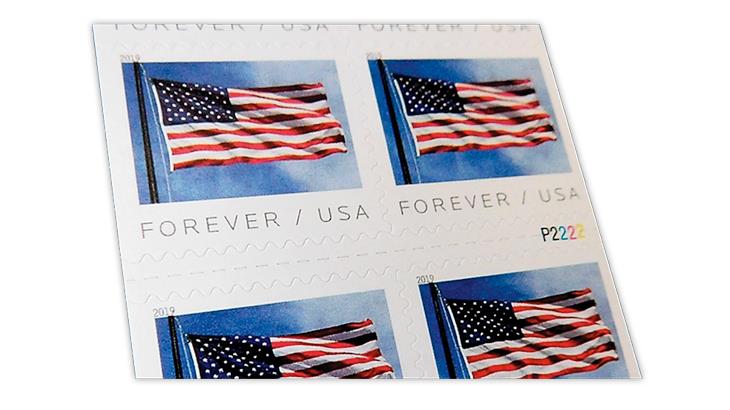 The 2019 United States Flag stamp in double-sided panes of 20 printed by Ashton Potter is being sold in post offices with plate number P2222. It is the second plate number reported for this specific variety of the Flag stamp. 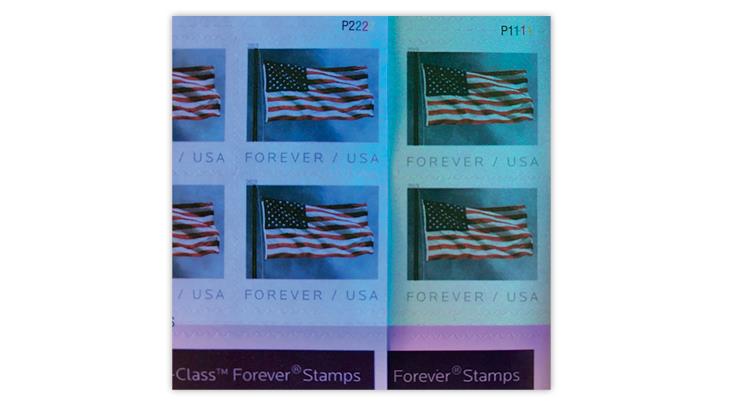 Under shortwave ultraviolet light, the new Flag booklet at left looks considerably brighter than the first printing of plate number P1111 at right, although both printings appear to use a similar method of tagging. Paper from a different supplier was used
Previous
Next

The 2019 United States Flag forever stamp printed in double-sided panes of 20 by Ashton Potter (Scott 5344) has been issued with plate number P2222.

When the Flag stamp was issued Jan. 27, 2019, it was available in four varieties: a double-sided pane of 20 (which the Postal Service describes as a booklet) and coil of 100, both from each of the U.S. Postal Service’s two contract printers, Ashton Potter and Banknote Corporation of America.

The multicolor plate numbers appear on a selvage strip between stamps on the double-sided panes, and directly on a single coil stamp printed at specific intervals on the roll.

The new plate number on the Ashton Potter double-sided pane corresponds with a new print run using stamp paper that is different from the original printing.

The Postal Service senior public relations representative Roy Betts confirmed to Linn’s Stamp News that the plate number change was made because of a change in paper supplier.

An examination by Linn’s comparing the two printings turned up a distinct difference when the two Ashton Potter panes are viewed under shortwave ultraviolet light.

The stamps from the newer printing with plate number P2222 appear noticeably brighter under the UV light, enough so that it should be possible to distinguish the printings even when comparing single stamps under UV light.

When the Flag stamps were issued in 2019, the Postal Service identified the paper type for the Ashton Potter pane printing as “nonphosphored type III, block tagged,” indicating a luminescent coating applied on the stamps, but not on the label found on one side of the pane.

The new printing also appears to use block tagging.

Scott catalog editors are now examining the two printings to determine if any additional detail regarding the differences will be included in the Scott Specialized Catalogue of United States Stamps and Covers.

A report in the March issue of Coil Line, the official journal of the Plate Number Coil Collectors Club, noted that the Banknote Flag coil has since been issued with plate number B2222, as reported in the April 13 Linn’s, page 15.