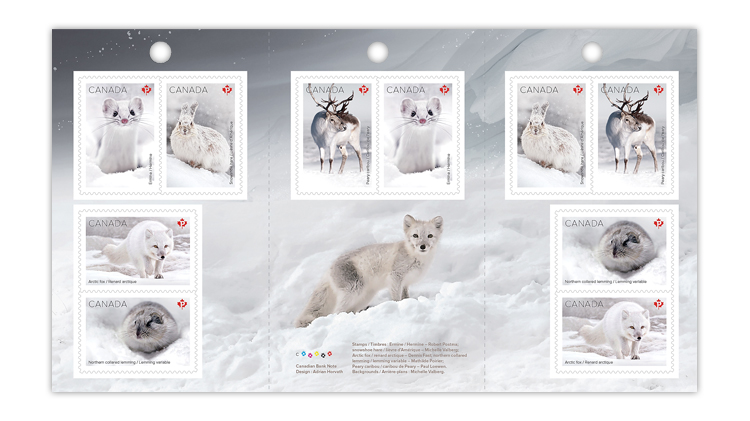 Canada Post reports that its Snow Mammals booklet of 10 issued Feb. 16 was so popular that it increased the print quantity from 300,000 booklets to 400,000. The five different stamps are arranged in five se-tenant pairs in the booklet pane of 10.

Canada Post has increased the print run for its booklets of Snow Mammals stamps, according to an announcement in the April issue of Details, its new-issue publication for stamp collectors.

That issue of Details also reported the release dates for two upcoming stamp issues: April 29 for Canadian Ballet Legends, and June 29 for the 100th anniversary of the launch of the Bluenose schooner.

The five Snow Mammals stamps showing an ermine, snowshoe hare, Arctic fox, Peary caribou and northern collared lemming, respectively, were issued Feb. 16 in a booklet of 10 (two of each design) and a souvenir sheet of five.

Jim Phillips, director of stamp services for Canada Post, said in Details, “One thing we didn’t expect was the popularity of our Snow Mammals issue — featured on the cover of our last edition of Details — with collectors and consumers. These adorable animal stamps have attracted a lot of media attention and, thanks to popular demand, we’ve increased our print run from 300,000 to 400,000 booklets to make sure everyone can get their paws on them.”