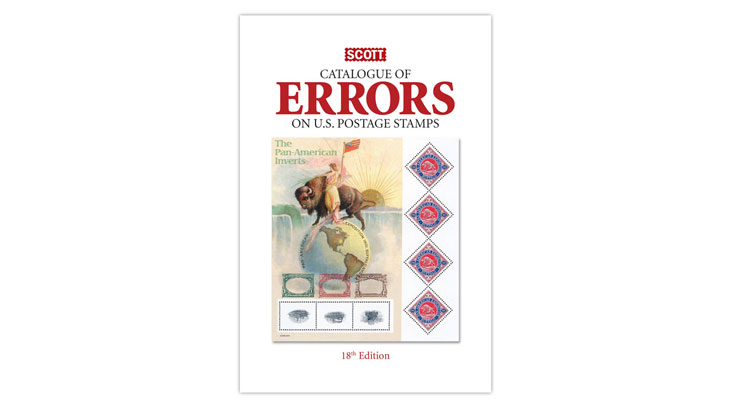 The 18th edition of the Scott Catalogue of Errors on U.S. Postage Stamps.

Continuing the tradition of offering a catalog devoted to United States errors, we present the 18th edition of the Scott Catalogue of Errors on U.S. Postage Stamps. Stephen R. Datz, a highly respected collector and specialist of errors for half a century, was the author of the 16th edition of the Scott U.S. Errors catalog. Datz, who resided in Colorado, died in 2015 at age 71. This is the second edition we have published after his passing.

The new 18th edition includes a multitude of enhancements. One of the most substantial is the number of new illustrations shown for the first time. Our editorial team spent a large amount of effort hunting down images of errors not seen in years.

Many new and updated images were added to the listings of printers’ waste items from the mid-to-late 1900s.

Also, numerous values were updated. Overall, hundreds of errors changed in value since the previous Scott U.S. Errors catalog was published in 2019.

A significant amount of market activity, finds and updated information came out of the errors from the William S. Langs stock that has been sold by Daniel F. Kelleher Auctions. Langs, a prolific dealer in error stamps, died in July 2020. The sale of his stock is continuing as of the publication of this edition, and future Scott U.S. Errors catalogs will likely see more updates as a result.

Specific values for imperforate plate number coil strips had a few updates in this edition. These strips are valued only in the Scott U.S. Errors catalog.

Overall, most errors have held their catalog values quite well, and some have exceeded estimates at auction.

Values for some classic-era and rare errors remain steady, while some show substantial increases. For example, the used vertical pair imperforate horizontally of the 1857 3¢ George Washington stamp (Scott 25b) skyrocketed from $10,000 to $25,000.

Among the color-omitted errors is a new find for this edition, which also is pictured on the cover. It is the possibly unique pane of 2001 Pan-American Invert stamps (Scott 3505) with all colors except black (vignettes) missing on the invert stamps (3505a-c) at the bottom of the pane, causing color-missing errors. This stunning error pane (3505e) has a catalog value of $15,000 based on the June 2019 sale of the item by Robert A. Siegel Auction Galleries.

Footnotes and other helpful information have been reviewed and updated accordingly.

If you have an image of a stamp error that is not pictured in this catalog, we would appreciate receiving an image for our files and for potential inclusion in a future edition. Updates or suggestions also are welcome. Send an email to scottcatalogueeditorial@amosmedia.com or write to Box 4129, Sidney, OH 45365.

To read the rest of John Hotchner’s report about these unusual D definitive stamps, subscribe to Linn’s Stamp News.