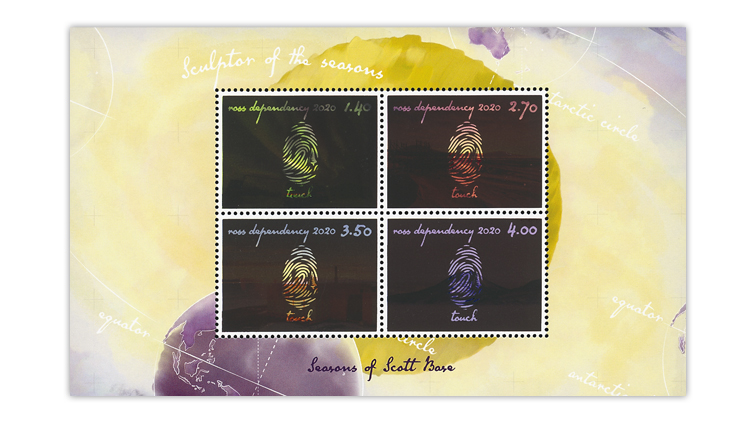 Four new Ross Dependency stamps issued Oct. 7 by New Zealand Post feature heat-sensitive ink in the black background. When the stamps are warmed, a seasonal photograph taken at Scott Base is revealed. Shown is the souvenir sheet featuring the four Seasons

Each stamp features a stylized fingerprint set against a black background. Below the fingerprint is the word “touch.” Heat-sensitive (thermochromic) ink was used to print the background.

In its announcement for the stamps, New Zealand Post said, “Thermochromic ink has been applied to these stamps, giving them a majority black finish, with a transparent fingerprint offering a glimpse beneath the darkness. The viewer must warm the stamp to reveal the magic of the Antarctic seasons.”

When warmed, each stamp reveals a different seasonal photograph of Scott Base. The photos were taken by Jonny Harrison, who works as an electrician on the base.

A winter scene featuring the Aurora Australis, or southern lights, is shown on the $1.40 stamp. Harrison’s picture of a spring sunrise at the base is on the $2.70 stamp.

The $3.50 stamp illustrates a summer sunset, and an autumn scene is featured on the $4 stamp.

The Seasons of Scott Base stamps and souvenir sheet are available on the New Zealand Post website.