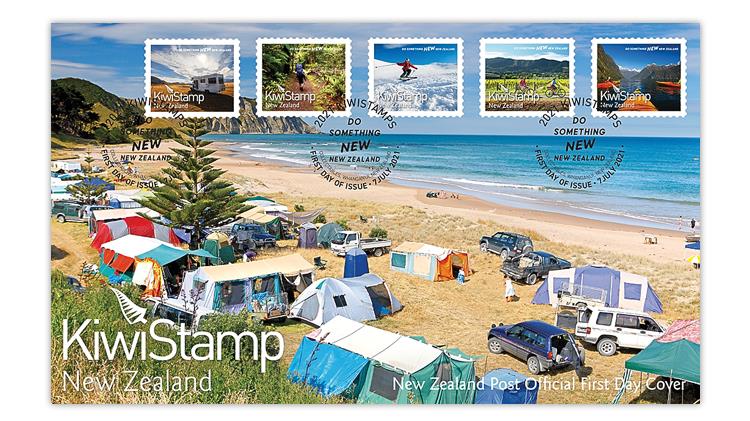 New Zealand stamps promote a tourism campaign that urges locals to get outside and “do something new.” A publicity image of the July 7 first-day cover is shown. 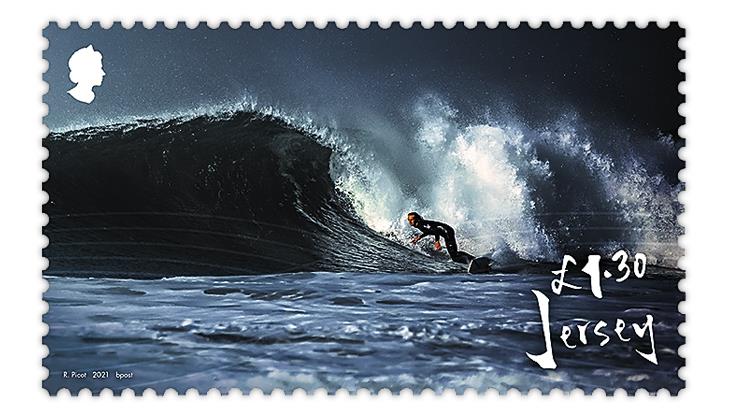 Jersey celebrates its surfing heritage on a set of stamps issued May 18. The set includes this £1.30 stamp picturing Richard Picot’s photograph of the waves and a surfer at St. Ouen’s Bay .
Previous
Next

A new set of stamps from New Zealand Post urges people to get outside and “do something new.”

The five stamps are scheduled to be issued July 7, and a publicity image of New Zealand Post’s first-day cover is shown nearby.

Starting on the left side of the FDC, the activities represented are a road trip, hiking (called “bushwalking” by New Zealand Post), skiing, bicycling and kayaking.

In announcing the stamps, New Zealand Post said: “In 2020 Tourism New Zealand launched Do Something New Zealand, a campaign designed to inspire Kiwis to step into the shoes of the international tourists who have been unable to visit due to COVID-19. A fresh set of KiwiStamps reflects this message with a focus on the joys of getting outdoors.”

KiwiStamps refers to nondenominated stamps that pay the basic domestic letter rate (NZ$1.50 as of July 1).

Alan Hollows designed the stamps. Southern Colour Print produced them by offset lithography in booklets of 10 and coils of 100.

Additional outdoor sports are showcased on recent stamps from other postal administrations.

The high denomination of the set, £3, is in a souvenir sheet of one and shows a black-and-white photograph taken in 1959.

The other denominations (54 pence, 74p, 88p, £1, £1.25 and £1.30) were issued in separate panes of 10. Jersey Post says that these six stamps “feature contemporary photographs taken by Jersey photographers and show surfers enjoying the waves at St. Ouen’s Bay.”

Jersey Post also said: “The Atlantic swell and tidal shifts, along miles of sand, make St. Ouen’s Bay, on the west coast of the Island, the perfect place for surfing. In fact, it is said that the British surf scene was born in Jersey. It stands to reason then, that Jersey has a rich surfing heritage.”

The security printer of Belgium’s postal administration, Bpost, printed the stamps by lithography, plus what Jersey Post describes as “a clear varnish in a wave pattern, which becomes visible when the stamps catch the light.”

Previous Jersey stamps also celebrate its surfing heritage, including a 2009 souvenir sheet of one £3 stamp marking the 50th anniversary of the Jersey Surfboard Club (Scott 1380), a 2012 49p Europa stamp with a tourism theme (1566), and a nondenominated stamp in a 2015 set reproducing award-winning designs in a contest for children (1910c). The last two designs also picture sailboats.