New stamps show shamrocks as symbols of religion, luck and the fishing industry 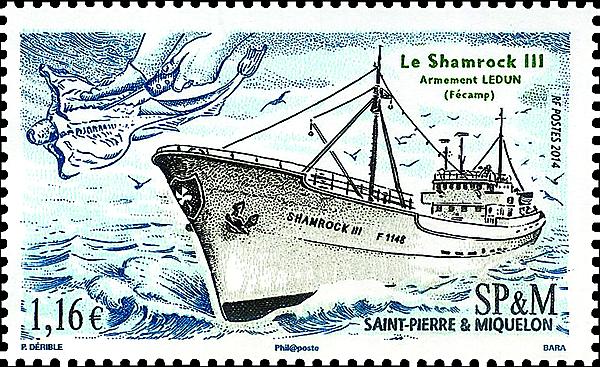 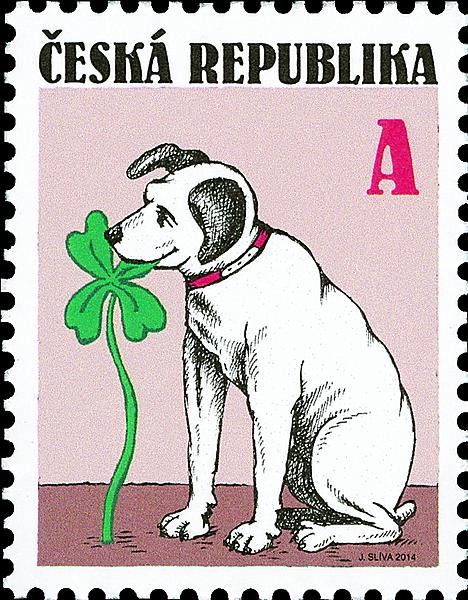 Figure 2. A dog and a four-leaf clover are featured on a new Czech Republic stamp called Good Luck Charm. 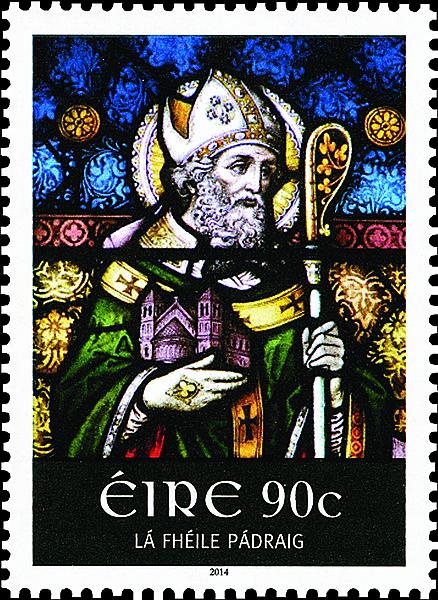 If you look closely at the saint’s right hand on the stamp, you can see an image of a three-leaf clover.

According to tradition, while serving as a missionary in Ireland in the fifth century, St. Patrick used such a clover to explain the concept of the Trinity.

Oonagh Young designed the stamp, using a photograph taken by Edward Coady of a stained glass window from St. Canice’s Cathedral in Kilkenny.

In this design, Patrick is holding a crozier in his left hand and the cathedral in his right.

The name Kilkenny is Gaelic for “Church of Canice,” and the town grew around a monastery founded there in the 6th century.

The current cathedral dates back to the 13th century.

Irish Security Stamp Printing printed the stamp by offset in panes of 16. A total of 116,000 stamps were printed.

In each of the following years, An Post issued a single St. Patrick’s Day stamp.

Most of the designs of these previous stamps show stained glass windows, paintings and other works of art featuring the saint. Exceptions include a shamrock on the stamp issued Feb. 9, 2007 (Scott 1705), and St. Patrick’s Day revelers wearing large green shamrock glasses on last year’s stamp issued Feb. 7 (1986).

A recent stamp from the Czech Republic pictures a shamrock as a symbol of good luck. The stamp is shown in Figure 2.

The letter “A” on this nondenominated stamp indicates that it pays the basic domestic rate for letters weighing up to 50 grams, currently 13 koruny. It was issued Jan. 20.

The republic’s post office, Ceska Posta, calls the stamp Good Luck Charm and describes the design as depicting a sitting dog chewing on a four-leaf clover.

In the book Magical Symbols of Love & Romance, Richard Webster says: “The four-leaf clover has been considered a potent source of good luck since the days of the ancient druids. They believed that it would help them see invisible negative spirits, which they would then be able to avoid.

The Czech Republic’s Post Printing House printed it by offset in sheets of nine stamps and 12 labels that show additional four-leaf clovers. The labels also can be personalized by postal customers.

The trawler has a four-leaf clover on its bow, as shown in the Figure 3 illustration.

Built in Belgium in 1957 and registered in France to Andre Ledun of Fecamp, Shamrock III was used in the salt fish trade. The filleting of a salt fish is shown at upper left on the stamp.

Patrick Derible designed the stamp, and Pierre Bara engraved it. Philaposte printed it by intaglio in sheets of 25. The quantity printed was 80,000.