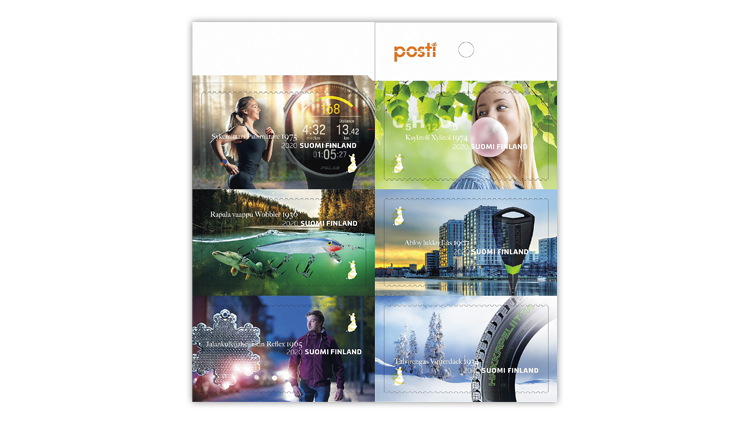 The Made in Finland booklet issued June 3 commemorates six Finnish innovations that make daily life easier for people around the world: the heart rate monitor, xylitol, the Rapala wobbler lure, the Abloy lock, the pedestrian safety reflector and the winte 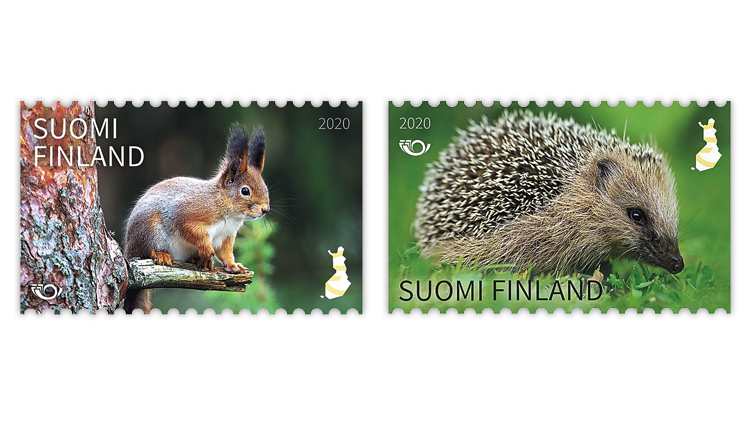 Booklet stamps showing a squirrel and a hedgehog are Finland’s contribution to the 2020 Norden stamp series with the theme of mammals. 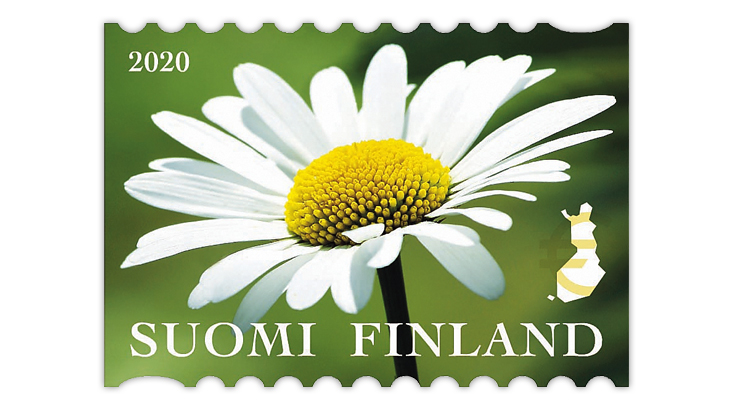 One of the eight domestic-rate stamps in Finland’s new Wildflower coil roll of 100 features a daisy.
Previous
Next

Finnish innovations are celebrated on a booklet of six stamps issued June 3.

Each of the 16 new stamps is nondenominated, paying the basic domestic rate. (The rate was €1.60 when the stamps were issued but increased to €1.75 on June 12.) The stamps are self-adhesive.

According to Posti, the Made in Finland booklet honors six Finnish innovations that are known around the world.

The first stamp in the upper left of the booklet pane features the heart rate monitor,

This monitor was included on the list of all-time 100 gadgets compiled by Time magazine.

Peter Ha, who was the magazine’s technology editor in 2010 when the list was compiled, wrote: “Originally devised on a ski track in Finland in 1975 to aid the national cross-country team, the heart-rate monitor went wireless in 1983. Since then it has changed how athletes train by giving other pertinent data, such as calories burned or average heart rate over a certain amount of time.”

In addition to a heart rate monitor, the stamp shows a woman running.

The stamp in the upper right depicts a young woman blowing a bubble with sugar-free chewing gum. She is standing under a birch tree. This stamp honors the 1974 invention of xylitol, an alternative to sugar originally made from birch tree bark.

The molecular formula of xylitol also is included in the stamp’s design.

The Wobbler fishing lure first handcrafted by Lauri Rapala in 1936 is commemorated on the third stamp in the booklet pane.

The website of the Rapala VMC Corp. says: “It was just one man and his hand-crafted lure in the beginning. Now Rapala VMC Corporation is a global player that brings together several brands and businesses to create a balanced portfolio. We provide fishermen with all they need, and we are increasingly doing the same to other outdoor-enthusiasts.”

The stamp features two lures in a Finnish lake.

The oldest invention commemorated on the Made in Finland booklet stamps is the Abloy lock invented by Emil Henriksson in 1907. The stamp pictures city buildings on a lake and one of the recent products of Assa Abloy, the Pulse introduced in 2018.

In its 2018 annual report, the company described the Pulse “as a lock with an innovative electronic cylinder that neither requires batteries or power supplies.”

The first stamp in the bottom row honors the creation of the pedestrian safety reflector in 1965. The design shows a man walking at night and a reflector shaped like a snowflake.

The history of the pedestrian safety reflector in Finland began in 1955 when farmer Arvi Lehti created a plastic reflector for use on the back of his horse carts.

Lehti later worked with Finland’s traffic police to make a reflector that people could wear. His son, Taisto Lehti, perfected this invention and introduced reflectors in various shapes, including the snowflake.

The final stamp in the booklet highlights production of the first snow tires in 1934 by Nokian Tyres.

The company said on its website: “In the very early stages of tire manufacture, Nokian engineers were quick to understand the need for a tire type that was specifically suited to the Nordic conditions. As a result, the first tread-patterned tire designed for winter use in trucks and lorries, or ‘weather tire’ as it was called, was manufactured.”

Susanna Rumpu and Ari Lakaniemi designed the Made in Finland booklet and stamps. The booklet cover shows the innovations in their early stages in chronological order, while the stamps portray modern versions of the products in different seasons.

Posti said, “In this fashion, the booklet and stamps depict the picture of the times and changes in design, in addition to the development of the products.”

The two stamps showing photographs of a hedgehog and squirrel, respectively, are part of the 2020 multination Norden series with the theme of mammals. Every other year, the eight Nordic postal administrations of Aland, Denmark, Faroe Islands, Finland, Greenland, Iceland, Norway and Sweden issue stamps on a common theme.

The stamps were issued in a booklet of 10, five of each design.

Stiina Hovi, the designer of the stamps, said: “Hedgehogs and squirrels are likeable little creatures, who play their own important role in the natural cycle. One is an adorable sniffler that waddles around at twilight, looking for insects. The other is a speedster that deftly snatches a peanut off a bird feeder in its mouth and climbs up the tree in the yard in a flash to nibble on the treat.”

Eight stamps showing different wildflowers in bloom were issued in a coil of 100 in conjunction with 2020 as the United Nations International Year of Plant Health and a related pollinator campaign in Finland called Insect Hotels 2020.