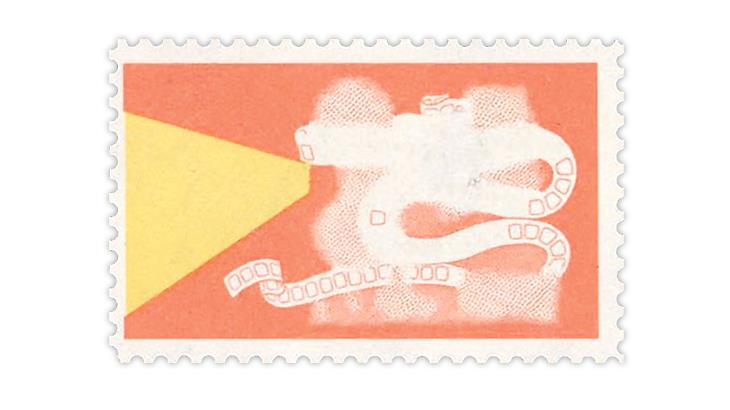 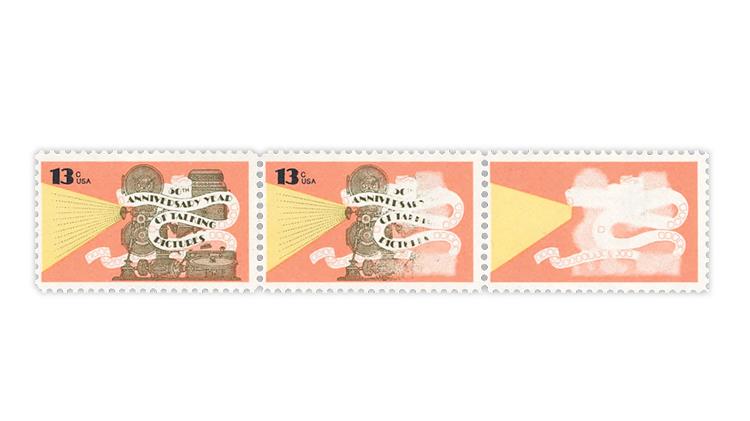 This horizontal strip of three U.S. 13¢ Talking Pictures stamps, graphically cropped from the intact pane of 50, shows a normal stamp (left), a stamp with some of the two affected colors omitted (center), and an error stamp with both colors completely omi 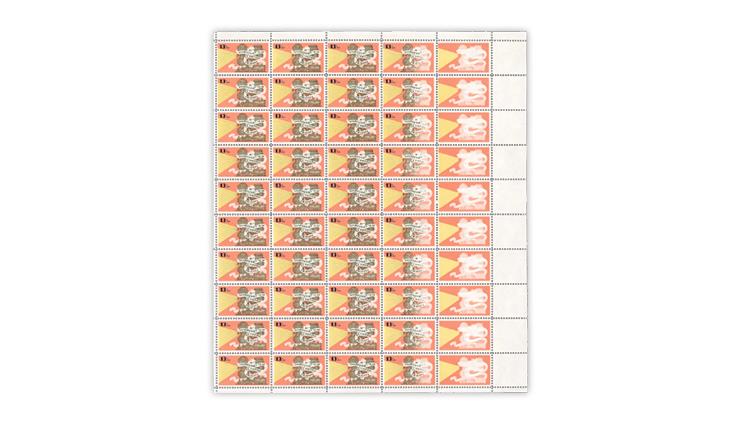 The 10 13¢ Talking Pictures error stamps come from the fifth column in the complete pane of 50, which Cherrystone will offer with a minimum bid of $14,000. 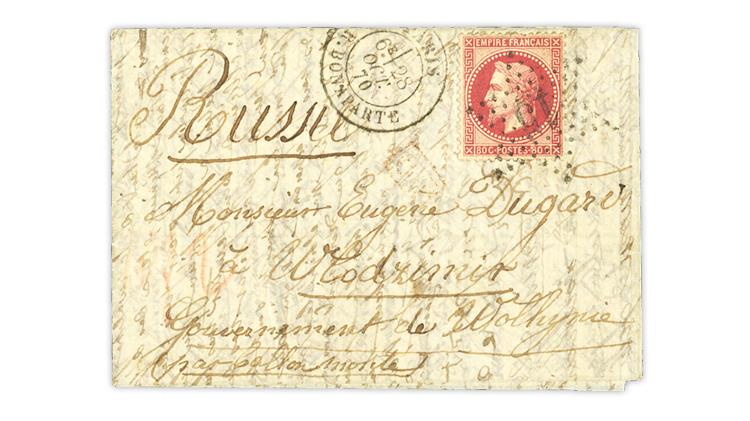 In light of current events, collectors seeking postal history with a connection to Ukraine might wish to bid on this attractive ballon monte cover carried aboard the Oct. 29, 1870, flight of the balloon Colonel Charas from Paris to Wlodzimir, Russia, whic
Previous
Next

Cherrystone Philatelic Auctioneers will offer a heretofore unreported color-omitted error of a 1977 United States stamp during a sale to be conducted July 12-14 at its headquarters in Teaneck, N.J.

The three-day auction, which features more than 1,700 lots of attractive 19th- and 20th-century U.S. stamps and select stamps and postal history from around the world, will be spread over five sessions, with sessions each day at 10 a.m. and 1 p.m. Eastern Time July 12-13 and 10 a.m. July 14.

Up for bids will be an extensive selection of United States and possessions, rarities of the 19th and 20th centuries, graded stamps, proofs, essays and various back-of-the-book material.

Other highlights are “rarities from Iran, including postal history, Italy and Italian Colonies, Nepal, Netherlands and Colonies, Panama, Russia and other collecting areas,” according to Cherrystone.

A highlight of the auction will be of interest to collectors of errors on modern U.S. stamps.

The printing miscue is a color-omitted error of the 1977 13¢ stamp (Scott 1727) commemorating the 50th anniversary of talking pictures.

The newly discovered error occurs in an intact pane of 50 where the 10 stamps in the fifth column are completely missing the lithographed brown and engraved black. A single error stamp, photographically cropped from the pane, is illustrated here.

Linn’s Stamp News was made aware of the 13¢ Talking Pictures color-omitted error pane at the April 22-24 Westpex show near San Francisco and subsequently learned that it would be consigned to Cherrystone’s July auction.

An expertizing certificate issued March 30, 2022, by Professional Stamp Experts in Henderson, Nev., states the pane is genuine with never-hinged original gum, “the right column of ten with brown and black (engr.) omitted, columns 1-3 normal and column 4 a transition.”

A horizontal strip of three stamps from columns three, four and five, also graphically cropped from the pane, is also illustrated here, along with the entire pane of 50. The strip makes it easier to see the progression (left to right) from a normal stamp to a stamp with some of the two affected colors omitted to a stamp with both colors completely omitted.

A source familiar with the new error told Linn’s Stamp News the pane was purchased in 1975 from a post office somewhere in the Northwest and subsequently consigned to Cherrystone by an anonymous collector.

“This is the discovery sheet of this error, kept by the owner for 45 years until this year, when he finally decided to have it certified by the PSE [Professional Stamp Experts],” Cherrystone said in its catalog lot description of the pane.

Cherrystone will offer this pane of the 1977 13¢ Talking Pictures stamp containing 10 color-omitted error stamps with an opening bid of $14,000.

Current events in Ukraine might motivate some collectors to bid on a handsome ballon monte cover carried aboard the Oct. 29, 1870, flight of the balloon Colonel Charas from Paris to Wlodzimir, Russia, which today is the small city of Volodymyr-Volynsky in northwestern Ukraine.

The cover is franked with a single France 1868 80-centime rose Napoleon III stamp on pinkish paper (Scott 36) tied by a clear strike of a dotted six-point star with large numeral “15” killer. A Paris R. (Rue) Bonaparte circular datestamp just to the left of the stamp indicates the cover was postmarked Oct. 28, one day before the flight.

An editorial note in the Scott Classic Specialized Catalogue of Stamps and Covers 1840-1940 explains the historical significance of ballon montes covers:

“‘Ballons Montes’ are letters which left Paris between Sept. 23, 1870, and Jan. 28, 1871, toward the end of the Franco-Prussian War. Placed under siege by the German army, the French capital was isolated from the rest of the world. With all other means of communication severed, Parisians took to the air, inaugurating what many consider to be the world’s first air mail. Of the 67 balloons that were launched from Paris, 56 carried mail that passed through the Paris Post Office, including private letters, newspapers and official documents. While some balloons were unmanned, most carried at least a single person in addition to the 225-275 pounds of mail.”

Cherrystone will offer this 1870 Ballon Monte cover from Paris to Russia with a starting bid of $2,300.

The catalog for the July 12-14 U.S. and worldwide auction can be viewed and is available for download on the Cherrystone website, with online bidding options available.