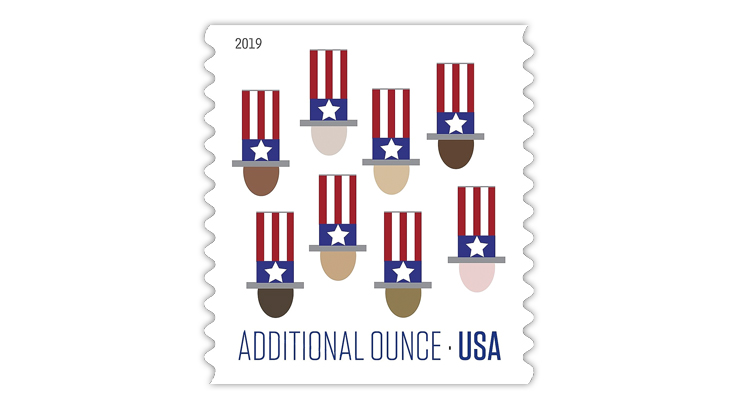 Promotional artwork for a new United States nondenominated (15¢) Uncle Sam’s Hat additional-ounce coil stamp. The coil will be issued Jan. 27, the day the additional-ounce rate will decrease from the current 21¢ to 15¢.

The new nondenominated stamp will have a postage value of 15¢ when it is issued Jan. 27 in a coil of 100 self-adhesive stamps.

The postage value for an additional ounce of first-class mail was 21¢ when the 2017 sheet version was issued. A postage rate change going into effect Jan. 27 reduces that rate to 15¢, meaning any nondenominated stamp with the additional-ounce designation (such as the 2015 Emperor Penguins stamps, Scott 4989-4990) will have that lower postage value, even though the stamp may have been purchased earlier at a higher cost.

U.S. forever stamps for 1-ounce or less domestic mail will increase from 50¢ to 55¢ on the same day.

The new coil version of the Uncle Sam’s Hat stamp is being issued without a first-day ceremony. The official city of issue is Kansas City, Mo., home to the USPS Stamp Fulfillment Services division.