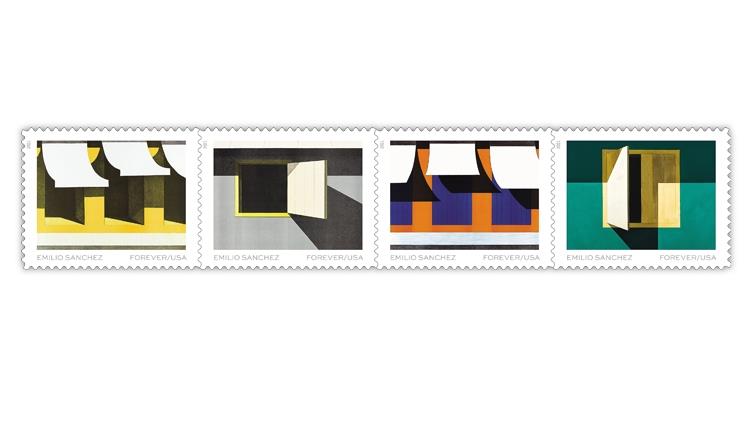 The new stamps commemorating artist Emilio Sanchez (1921-99) show four different paintings created between 1972 and 1982. These paintings are representative of his works that highlight architectural elements. 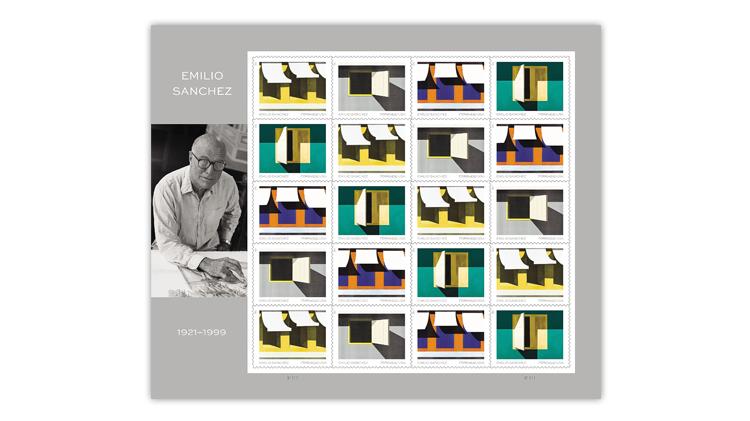 The Emilio Sanchez set of four stamps will be sold in a pane of 20 with a decorative side banner that shows a 1993 photograph of the artist. 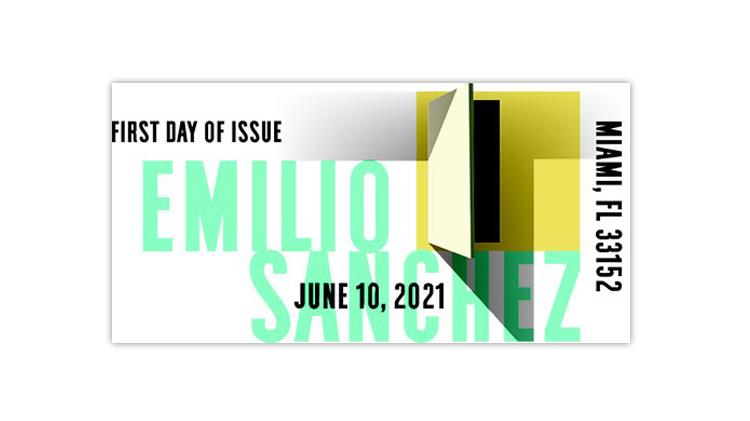 The pictorial color postmark for first-day covers includes a detail of the 1981 untitled painting that is shown on one of the four new stamps.
Previous
Next

U.S. Postal Service art director Antonio Alcala designed the stamp issue, which will be offered in panes of 20. The pane includes a decorative margin on the left side with a black-and-white photograph of Sanchez taken by Alexis Rodriguez-Duarte in June 1993.

The photograph shows Sanchez sketching at the drawing table in his New York City loft studio, according to the Postal Service.

The commemorative set of stamps will be issued with a first-day ceremony at LnS Gallery in Miami, Fla. Attendance at the ceremony is by invitation only because of safety concerns, according to the Postal Service.

The individual stamps in the new set appear to show most or all of the four works reproduced: Los Toldos (1973), Ty’s Place (1976), En el Souk (1972) and Untitled (Ventanita entreabierta) (1981). This full portrayal is unusual on U.S. stamps, where artworks are commonly cropped to depict details of paintings or to fit a specific stamp size.

In the margin below the image of the artwork on each stamp is the inscription “EMILIO SANCHEZ” at left and “FOREVER/USA” at right.

“Best known for his architectural paintings and lithographs, Sanchez explored the effects of light and shadow to emphasize the abstract geometry of his subjects,” the Postal Service said in its announcement of the new stamps. “His artwork encompasses his Cuban heritage as well as his long life in New York City.”

Sanchez was born June 10, 1921, into a wealthy family in the city of Camaguey in central Cuba.

“He lived in privilege on his grandfather’s plantation in Camaguey until he was a teenager, when he was sent to several prestigious boarding schools in Miami and Connecticut, ultimately settling in New York,” according to Pam Reister, writing in the Michigan Quarterly Review.

Once in New York, he studied at the Art Students League, becoming an American citizen in 1968.

But it was as a youngster in Cuba that “he became fascinated with the play of light and shadow on colored forms that became a dominant characteristic of his works,” according to the Emilio Sanchez Foundation. “His early works of the 1950s are stylized and figurative depicting themes such as portraits of friends and models, views of New York and tropical landscapes”

The Postal Service describes his artwork as combining naturalism and abstraction.

“Sanchez’s architectural paintings and lithographs are not precise renderings but rather subjective interpretations of reality. Each work often depicts a single building. All extraneous details have been stripped away, although sometimes he highlights a specific feature, such as a balustrade, arched doorway or balcony. Strong light and deep shadows play across each building’s facade, delineating and emphasizing its abstract geometry without ever obscuring its true character.”

Along with the 20-stamp pane, a limited number of press sheets for the Emilio Sanchez set will be offered as well. Two varieties of press sheets — one with the die cuts that separate individual stamps, and one without die cuts — can be ordered from the USPS Postal Store.

On the day of issue, the Postal Service will accept credit card orders for press sheets by telephone at 844-737-7826.

All U.S. press sheets offered so far this year have sold out very quickly, often on the day of issue.

The Emilio Sanchez press sheets are priced at $99, indicating nine unsevered panes of 20 stamps on each sheet.

The Postal Service will also sell first-day covers in sets of four with a standard four-bar first-day-of-issue postmark in black or a digital color pictorial postmark.

The color postmark shows the detail of the open window from the 1981 untitled painting shown on one of the stamps.