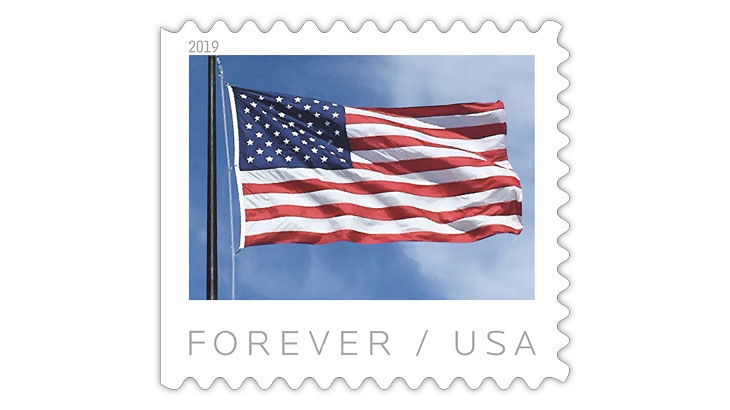 This new United States Flag design will be featured on nondenominated (55¢) U.S. stamps that will be issued Jan. 27. The design will be used on two different double-sided booklets and two coils. 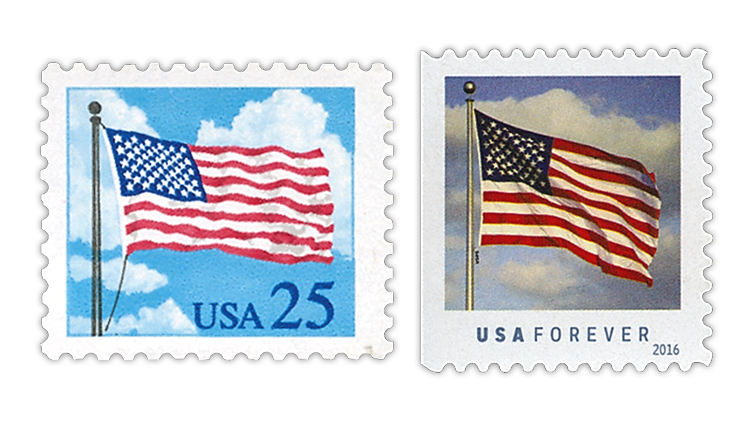 A fluttering American flag against a sky with clouds is a popular theme for U.S. stamps. These earlier examples were issued in 1988 (the 25¢ stamp at left) and 2016 (the forever stamp at right).
Previous
Next

The United States Postal Service has planned a number of new stamp issues to coincide with its upcoming postage rate changes.

A new nondenominated (55¢) U.S. Flag forever stamp design was revealed in December 2018 and will be issued in four announced varieties on Sunday, Jan. 27, the day the new rates take effect.

The first-class domestic letter rate is increasing from 50¢ to 55¢.

No first-day ceremony is planned for the U.S. Flag issue. Instead, the Postal Service has announced that Kansas City, Mo., has been designated as the official first-day city for the purposes of postmarking first-day covers.

“With this new 2019 stamp, the Postal Service celebrates the American flag, the most recognizable symbol of our nation,” the USPS stated in its Dec. 19 announcement.

“The stamp features a U.S. flag, one of several on the flagpoles near the end of Chicago’s Navy Pier, waving in a May breeze.”

The photograph of the flag was taken by USPS art director Antonio Alcala, who also designed the stamp.

According to technical details published by the Postal Service, the plate numbers on the new Flag coil stamps will appear on every 31st stamp positioned “beside the stamp image,” which seems to be a further indication that the coil itself will be vertical.

Although all of the stamps share the same design, the size and placement of the microprinting on the stamps will likely aid in identification.

It is likely that specific USPS item numbers for the four different products will be assigned close to the actual issue date, for collectors who prefer to order and identify the individual varieties in mint stamps.

This information will be published in Linn’s 2019 U.S. Stamp Program when it becomes available.

Collectors can also inquire at local post offices after the stamps are issued Jan. 27.

Coils of stamps are usually wrapped with a leader strip that might identify the printer as either APU or BCA. Plate numbers on the coil stamps from the two printers will show the same letter-number combinations as the double-sided panes.

The Postal Service has not announced information about USPS-prepared FDCs for the new stamps, though it is likely that one or more FDCs with black cancels will be offered.