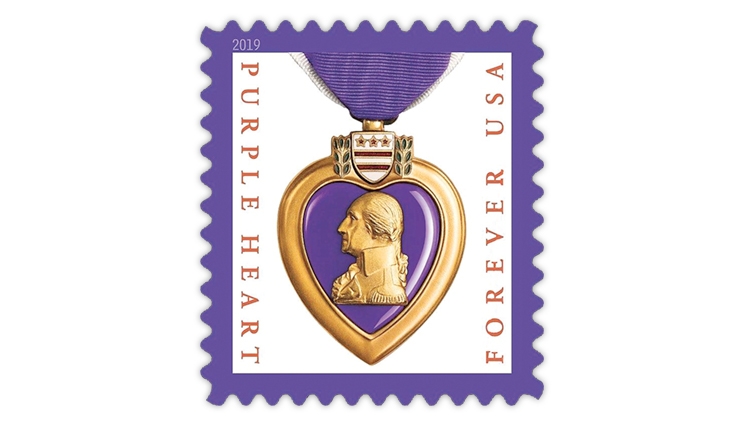 The Purple Heart forever stamp has been redesigned by the United States Postal Service. This new version with a purple border will be issued Oct. 4. 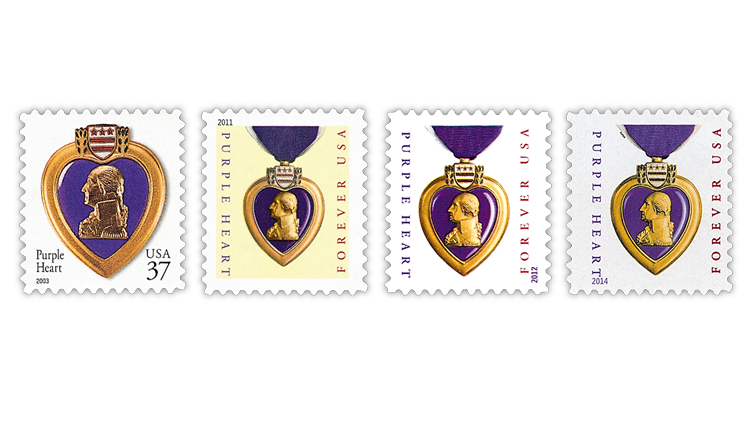 Major varieties of the United States Purple Heart definitive stamp have included noticeable changes in designs. After the first stamp was issued with no ribbon, later versions added the medal’s ribbon and a cream background, a ribbon and white background, 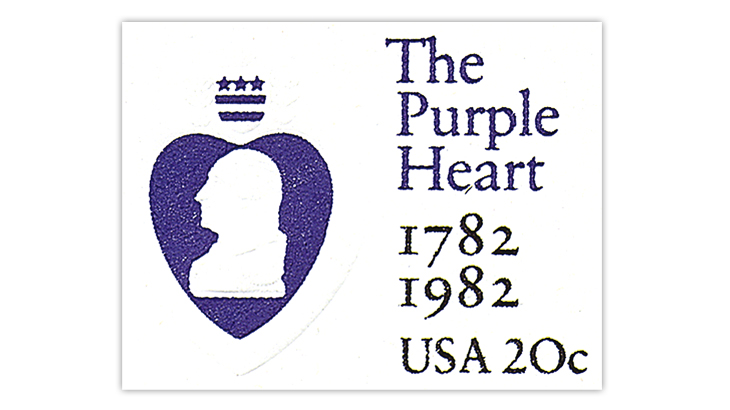 The Purple Heart was commemorated on the 200th anniversary of George Washington’s original award with a 20¢ stamped envelope. The imprinted and embossed stamp is pictured here.
Previous
Next

The United States Postal Service will issue its newest iteration of the Purple Heart stamp Oct. 4 with a first-day ceremony at the Indypex stamp show.

News of the nondenominated (55¢) forever stamp was first reported in Linn’s Aug. 26 issue.

The website of the Indypex show reports that the ceremony will begin at 11 a.m. in the Fairgrounds Annex building.

The stamp will be available nationwide on the day of issue.

The new stamp will be issued in a pane of 20 printed by USPS contract printer Banknote Corp. of America.

The stamp design features the medal (with part of its ribbon) that is awarded to U.S. military personnel who have been wounded or killed in action.

“Established by General George Washington during the Revolutionary War, the badge of distinction for meritorious action — a heart made of purple cloth — was discontinued after the war,” according to the Postal Service.

With support from Gen. Douglas MacArthur, the modern purple heart medal emerged in 1932 in association with Washington’s 200th birthday.

The new medal was to be awarded “to persons who, while serving in the Army of the United States, perform any singularly meritorious act of extraordinary fidelity or essential service.”

Over the years, eligibility for the Purple Heart was extended to members of all branches of the U.S. military.

According to the U.S. Army Human Resources Command, the awarding of the medal currently is limited to:

members of the Armed Forces of the United States who, while serving under component authority in any capacity with one of the U.S. Armed Services after 5 April 1917, has been wounded, was killed, or who has died or may hereafter die of wounds received under any of the following:

In any action against an enemy of the United States.

In any action with an opposing armed force of a foreign country in which the Armed Forces of the United States are or have been engaged.

While serving with friendly foreign forces engaged in an armed conflict against an opposing armed force in which the United States is not a belligerent party.

As the result of an act of any such enemy of opposing Armed Forces.

As the result of an act of any hostile foreign force.

After 28 March 1973, as the result of an international terrorist attack against the United States or a foreign nation friendly to the United States, recognized as such an attack by the Secretary of Army, or jointly by the Secretaries of the separate armed services concerned if persons from more than one service are wounded in the attack.

After 28 March 1973, as the result of military operations while serving outside the territory of the United States as part of a peacekeeping force.

The medal design shows a left-facing profile of Washington within a purple heart framed in gold. Above Washington is a representation of his family crest. The medal is suspended from a purple ribbon bordered in white.

A purple border around the outer edge of the stamp encloses the medal. The addition of the purple border easily distinguishes the new variety from the 10 major varieties of U.S. Purple Heart stamps previously issued.

The Purple Heart medal has appeared on U.S. stamps with great regularity since 2003, when a 37¢ self-adhesive stamp printed by Banknote Corp. of America in panes of 20 was issued May 30 (Scott 3784).

A second variety by a different contract printer, Ashton Potter, was offered that same year on Aug. 1.

The two similar 2003 stamps can be distinguished by several minor characteristics, including a variation in the die cuts (commonly referred to as the perforation measurement or gauge).

Besides denomination changes, there have been important design alterations over the years.

The first several Purple Heart stamps showed the medal alone, without its ribbon, against a white background.

In 2011, a new forever variety was issued with the medal and ribbon depicted against a cream color background (Scott 4529).

The next Purple Heart stamp reverted to a white background, still showing the purple ribbon.

The most recent variety was issued in October 2015. The nondenominated (49¢) forever stamp has a 2014 year date at lower left and, unlike earlier varieties of the same design type, it has the microprinted letters “USPS” along the upper left edge of the medal’s ribbon.

The 2015 version of the Purple Heart stamp remains on sale at some post offices and from the USPS Stamp Fulfillment Services division.

The Purple Heart medal was also commemorated with a 20¢ stamped envelope (Scott U603) issued Aug. 6, 1982, marking the bicentennial of the original award developed by Washington. The printed and embossed stamp on the envelope shows elements of the modern medal.