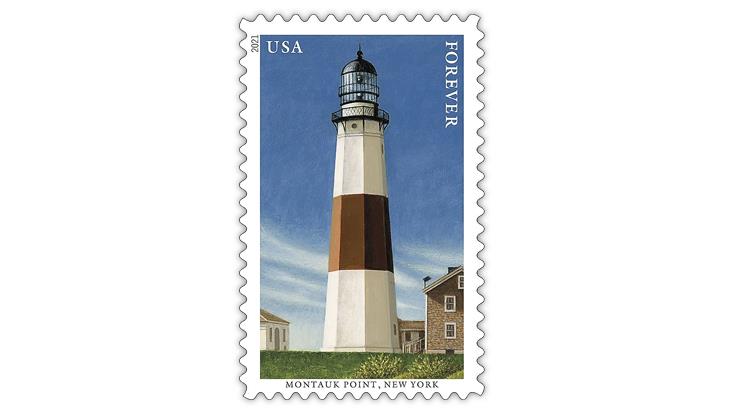 A stamp depicting Montauk Point Lighthouse in New York is one of five forever stamps to be issued Aug. 6. 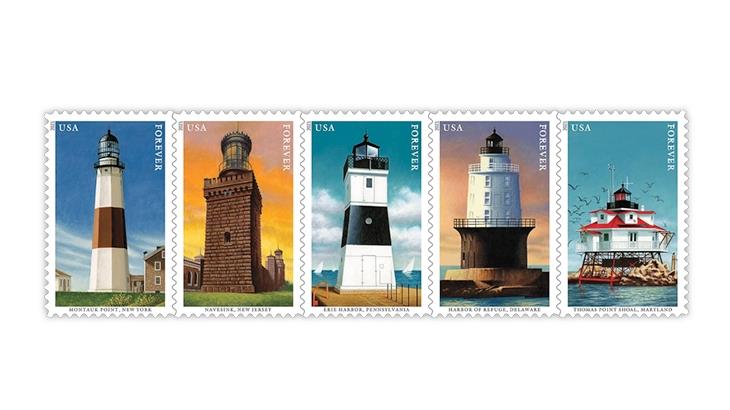 The five Mid-Atlantic Lighthouses forever stamps will be issued Aug. 6 in a pane of 20. The stamp illustrations were painted several years ago by Howard Koslow, who died in 2016. The beacons shown are Montauk Point in New York, Navesink in New Jersey, Eri 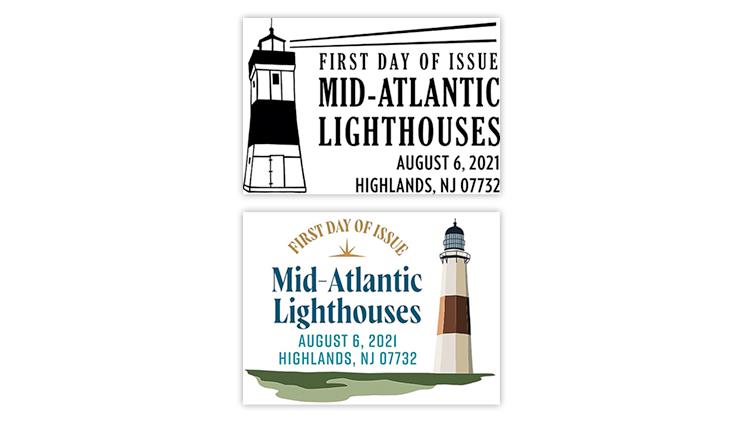 The U.S. Postal Service has prepared two pictorial first-day cancels for the Mid-Atlantic Lighthouses issue. Each version shows one of the five lighthouses that appear on the new stamps.
Previous
Next

These new stamps are as much a tribute to the shoreline beacons as they are to the artist who painted their portraits.

Howard Koslow, who died at age 91 in 2016, is recognized as one of the premier U.S. stamp artists of recent memory. This new set brings together the final images Koslow painted for the Postal Service.

The set is also the seventh in a series of Lighthouses stamps that stretches back to 1990, all of them featuring Koslow’s splendid lifelike paintings.

The nondenominated (55¢) stamps will be issued in a pane of 20, offset-printed by USPS contractor Banknote Corporation of America.

A first-day ceremony is planned on the issue date in Highlands, N.J., where one of the five featured lighthouses is located. The event will begin at noon Eastern Time at Twin Lights State Historic Site, 2 Light House Road, in Highlands. Participants will include USPS vice president of engineering systems Linda Malone.

Additional information about the ceremony and advance registration is available at usps.com/mid-atlanticlighthouses.

The Postal Service provided the following descriptions for the five lighthouses depicted on the new stamps.

“Located in the Chesapeake Bay south of Annapolis, Maryland, the Thomas Point Shoal Lighthouse has withstood the elements since 1875,” according to the Postal Service. This light was designated as a National Historic Landmark in 1999.

“Harbor of Refuge Lighthouse has stood in Delaware Bay near Lewes since 1926, replacing previous lights that had stood on the spot since 1902.

“One of only seven stations in the country to feature two lighthouse towers, New Jersey’s Navesink became the first light station in the U.S. to have Fresnel lenses installed. The current lighthouses were built in 1862 of local brownstone, and the keepers’ quarters and storage rooms link the two non-identical towers.” Navesink has been a National Historic Landmark since 2006.

“Pennsylvania’s Erie Harbor Pierhead Light has helped ships navigate the narrow inlet between Lake Erie and Presque Isle Bay for more than 150 years. Its design is unique; the tower tapers from its base to its midsection, then rises straight from there to the top, the only lighthouse tower with this shape in the U.S.,” the Postal Service reported.

The five states represented on the new stamps are among the seven (New York, New Jersey, Pennsylvania, Delaware, Maryland, Virginia and West Virginia) and the District of Columbia that are commonly described as the Mid-Atlantic states, situated between the Northeastern and Southeastern states.

While the first set of five Lighthouses stamps issued in a booklet in 1990 (Scott 2470-2474) featured structures from Washington state to Florida and Maine, each subsequent set was designated to represent a specific geographic region.

In 1995, the Postal Service issued five stamps showing Great Lakes lighthouses, with each 32¢ stamp depicting a U.S. lighthouse near the shore of a different lake in the region (Scott 2969-2973).

The Southeastern Lighthouses set from 2003 (Scott 3787-3791) features beacons in Virginia, North Carolina, South Carolina, Georgia and Florida on 37¢ stamps in a pane of 20.

All of the sets that followed have been similarly formatted, in a pane of 20 with a banner head that gives the name of the set as determined by the Postal Service.

The Pacific Lighthouses set of 41¢ stamps (Scott 4146-4413) opened with stamps representing Hawaii and Alaska, before returning to Washington state and showing lighthouses from Oregon and California.

Florida found itself represented for a third time with the Fort Jefferson Lighthouse among the five Gulf Coast lighthouses on 44¢ stamps in 2009 (Scott 4409-4795). Also shown were lighthouses in Texas, Louisiana, Mississippi and Alabama.

The Postal Service describes the new Mid-Atlantic Lighthouses issue as “the seventh and final issuance in the Lighthouse series.”

Koslow’s artwork was rendered in acrylic paints and based on photographs of the lighthouses, according to the Postal Service.

An accomplished artist whose work has been displayed at the Smithsonian’s Air and Space Museum and the NASA Art Gallery at the Kennedy Space Center, Koslow entered the field of stamp illustration in 1971 when his design was used for the 8¢ Map of Antarctica stamp (Scott 1431) printed by the U.S. Bureau of Engraving and Printing.
With the issuance of the new Mid-Atlantic Lighthouses set, Koslow is one of very few stamp artists whose work has been featured on U.S. stamps over a span of half a century.

He also created illustrations for the 6¢ Wolf Trap Farm stamp in 1972, the 20¢ Brooklyn Bridge stamp in 1983, eight of the 1940s Celebrate the Century stamps in 1999, and numerous others, as Linn’s Washington Correspondent Bill McAllister described in a tribute to Koslow shortly after the artist’s death (Linn’s, Feb. 22, 2016, page 10).

Koslow’s other postal creations include numerous U.S. postal cards. He also painted images for many stamps of the Marshall Islands, which in 2016 issued a 20-stamp tribute pane with 20 different illustrations by Koslow (Scott 1141).

The Postal Service has revealed two designs, one in black and one in color, for pictorial first-day cancels for the new forever stamps.

The designs each show one lighthouse from the same angle as it appears on its stamp.
The black postmark showcases the unusual shape of the Erie Harbor Pierhead Lighthouse. The color postmark features the Montauk Point Lighthouse.

Collectors can submit their own prepared envelopes to obtain the black postmark for free. The Postal Service also sells sets of five first-day covers postmarked with either the black or color postmark.