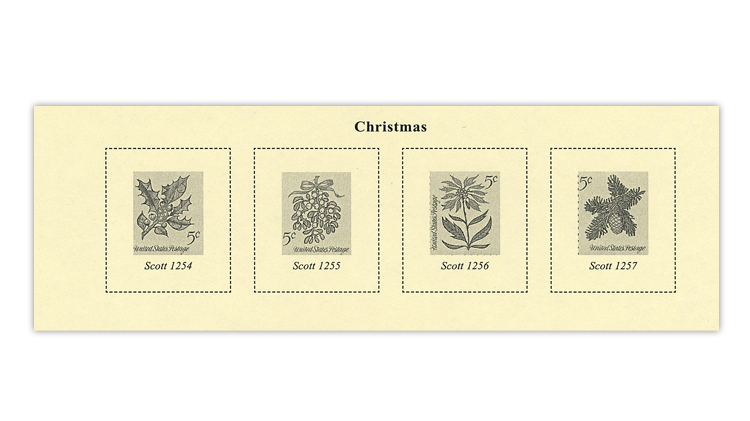 The new Scott United States National Used Singles part 1 album includes spaces for singles from se-tenant (attached) stamp issues. These spaces are for the Christmas stamp issue of 1964, which was the first such issue in the United States. 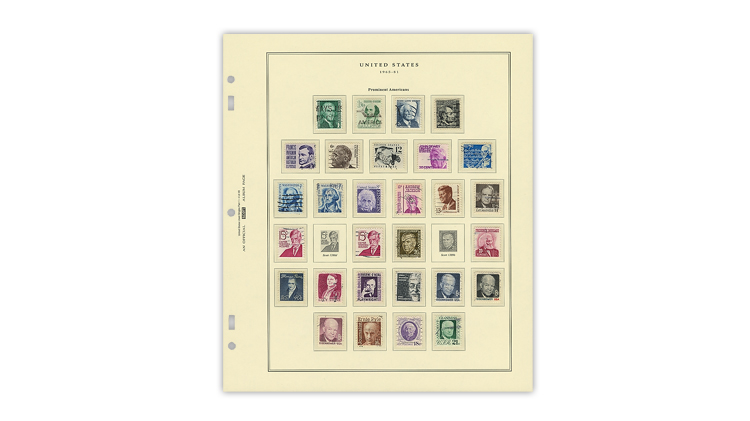 This album page of mounted definitive stamps from the 1965-81 Prominent Americans series is nearly complete.
Previous
Next

Collectors of United States used stamps should take note of the latest album pages created by Amos Media Co. as part of the Scott National line of products.

The new album pages are titled “Scott United States National Used Singles,” and the first part covers 1964 through 1979. The new product is planned for release in mid-January. Pre-orders are being accepted.

What sets this album apart from the pages for mint stamps is that it provides a separate framed box for each stamp of a se-tenant issue (in other words, an issue of two or more attached stamps). The first se-tenant U.S. stamp issue was the Christmas stamps of 1964 (Scott 1254-1257), and that is why these album pages start with that year.

Pictured nearby is a page cropped to show the 1964 Christmas stamp issue.

The first part includes 50 pages that can fit in Scott Specialty Series binders and slipcases.

You can choose to use mounts or hinges to place stamps on the pages. Shown nearby is a nearly complete page of mounted Prominent Americans stamps.

There are spaces provided for some minor-letter varieties that might not be included in the regular National album.

New parts of this series of album pages will continue to be released throughout 2019 and beyond, providing spaces for stamps issued up to the present day.