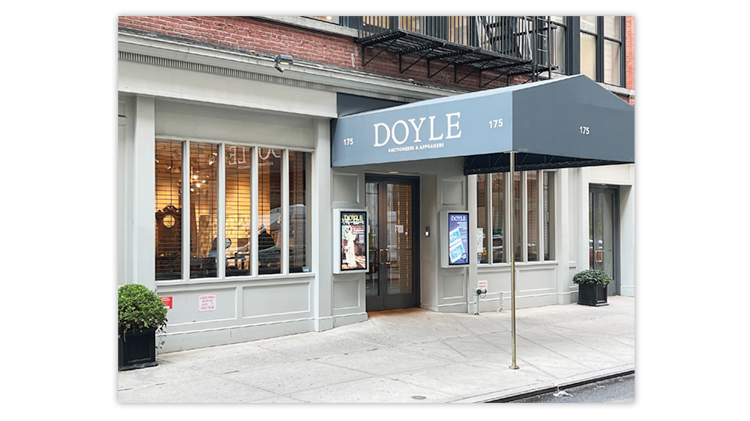 Doyle, probably the last New York City auction house selling both fine art and rare stamps, said it did not anticipate any immediate changes to its business practices as a result of recent city deregulation.

In a move that has taken many by surprise, the New York City Council has lifted long-standing rules on how auction firms conduct their business.

The city included the changes as part of a sweeping package aimed at reinvigorating small businesses in the wake of the COVID-19 pandemic by doing away with a variety of requirements. Although the vote on the changes took place last summer, most people learned about them for the first time in a New York Times report on May 3.

While The New York Times and other media including ArtNet News reported the rollback as chiefly affecting art auction firms such as Christie’s and Sotheby’s — hardly small businesses — it will also pertain to firms that deal in stamps and collectibles.

Charles Epting, the president of H.R. Harmer, a stamp auction firm based in Manhattan, said he first became aware of the changes when he received a letter in April from the city’s Department of Consumer and Worker Protection informing him that as of June 15 he would no longer be required to renew his auctioneer’s license. That license had cost $400 for a two-year period.

Other restrictions being abolished relate to disclosures that auction firms are required to make in the name of transparency and fairness, such as the existence of reserve bids over the low estimate and whether an auctioneer or third party has a financial stake in an item being sold.

Rules about practices such as chandelier bidding, a form of shill bidding in which an auctioneer pretends to take bids in order to reach a hidden reserve, will also be relaxed, according to ArtNet News.

The regulations had accumulated over more than three decades, as city authorities sought to bring some accountability to a commercial art world where shady dealing and money laundering had been rampant. But as The New York Times reported, in recent years there were few complaints about auction firms and it was felt that any grievances that might arise could be addressed under other consumer-protection laws.

For their part, Christie’s and Sotheby’s were quoted in ArtNet News as saying they had not lobbied for the rollback and were as surprised by it as anyone else. Both firms, which annually sell billions of dollars worth of fine art at auction, announced that for the time being, they would continue to abide by the old rules so as not to cause confusion among bidders.

Both firms are part of worldwide networks and generally apply the same New York rules to sales they conduct in Los Angeles, London and Hong Kong, even though they are not required to.

Louis Webre, director of communications at Doyle, one of the very few New York auction houses dealing in both fine art and rare stamps, said he did not foresee any changes in the firm’s operations and stressed the importance of maintaining customer confidence.

He added that the pandemic had led Doyle to expand its online auction business with smaller, more frequent sales. The firm used to conduct two stamp auctions a year (out of about 50 sales overall); it now schedules twice as many.

It does not seem that the expiring regulations ever had much impact on how the stamp auction business was run. Cherrystone Auctions, which recently moved from New York City to neighboring New Jersey, did so not because of regulations but for business reasons.

“It is irrelevant,” wrote Joshua Buchsbayew, the vice president of Cherrystone, in an email discussing the revocation. “Just saves on auction license fees. We moved to NJ which does not require an auction license and online auctions never required a license.”

Epting, whose firm moved from California to New York in 2019 undeterred by any regulations, said he has mixed feelings about the changes.

On the one hand, he said he appreciates no longer having to pay the fees or wait in line for his license together with the laundry and food truck operators (who are also henceforth freed from the city’s permit requirements). On the other hand, he feels some uneasiness that “anyone can get into the business,” without any kind of oversight.

That sentiment echoed reservations expressed by some art market experts quoted in The New York Times and ArtNet News.

“I don’t expect greater transparency” as a result of the rollback, said Michael McCulloch, a lawyer in charge of compliance at Sotheby’s, who was quoted in ArtNet News. “This is a significant concern to [the art] buyer and to price stability in the market.”

Whether such oversight was ever a reality or just a fiction, however, may have been the real motivation behind the city’s move to eliminate what it saw as needless and unaffordable regulation.

Scott Trepel, the president of Robert A. Siegel Auction Galleries, also in Manhattan, was more scathing: “There was absolutely no compliance enforcement and the bonding process was pointless. Sotheby’s chairman went to prison because of criminal conduct,” Trepel said, referring to Alfred Taubman’s 2002 conviction for price-fixing. “They never lost their license. What does that tell you?”

Hopefully, it will not be naive to presume that in the future other laws, along with the stamp trade’s own ethics rules and auction firms’ desire to maintain the confidence of buyers and sellers, will suffice to ensure honest auction practices, regardless of their locale.