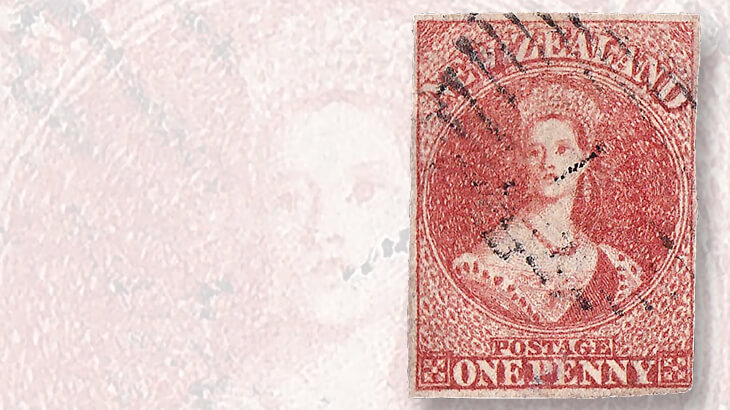 Status International’s sale Sept. 1 offered one of the great rarities of New Zealand philately: the 1-penny of the 1855 first issue, from the London printing. It sold for $10,450.

In Sydney, Australia, Status International held a sale Sept. 1. Naturally, it was heavy on Australia and British Empire stamps, with the standout lot being a lovely example of New Zealand’s first stamp.

The remote South Pacific colony had its first issue in 1855, in denominations of 1 penny, 2d and 1 shilling (12d). Because there was no capability for high-quality security printing in New Zealand at the time, the stamps were prepared in England by Perkins, Bacon & Co., the same firm that had produced the Penny Black and all of Britain’s line-engraved Victoria stamps.

The design for New Zealand featured a likeness of Queen Victoria based on a full-length portrait by the Swiss painter Alfred Edward Chalon, done at the time of the queen’s ascension to the throne in 1837.

Reproduced as a watercolor by Edward Henry Corbould and engraved for postage stamps by the talented and prolific William Humphrys, the so-called Chalon Head design was used by almost a dozen British colonies, from Canada to southern Africa to the Australian states. (The painting, and several of the stamps based upon it, can be seen here.)

On the New Zealand stamps, the not quite full-face portrait of Victoria is surrounded by a complex geometric pattern in a circle, engraved by a special mechanical lathe known as a “rose engine.” This proprietary technology earned Perkins, Bacon & Co. many security-printing contracts, because the combination of masterful hand-engraved portraiture and ornate mechanical patterns made the results almost impossible to forge.

Only a limited printing of the first New Zealand stamps was done in London, on paper watermarked with a large six-pointed star. The plates then were shipped to the colony and further printings were done in Auckland on unwatermarked paper. Additional denominations, papers and perforation types resulted in dozens of varieties during the next 20 years.

The original London printing of the 1-penny remains one of the rarest stamps in New Zealand’s Chalon series, and, as the country’s Number One, it is highly prized by collectors. The example in the Status International sale, with “almost four margins” and a light cancel leaving the portrait clearly visible, was accompanied by a certificate from Robert Odenweller, the noted U.S. expert on New Zealand philately.

Stamps and postal history of India shone in a number of recent sales, revealing the incredible range of material in the subcontinent’s philately.

British rule over India took various forms from the second half of the 18th century until 1947. Beginning in 1854, the East India Co. and, later, the British government issued stamps that were valid across India as well as in places like the Arabian peninsula that fell under Indian postal administration.