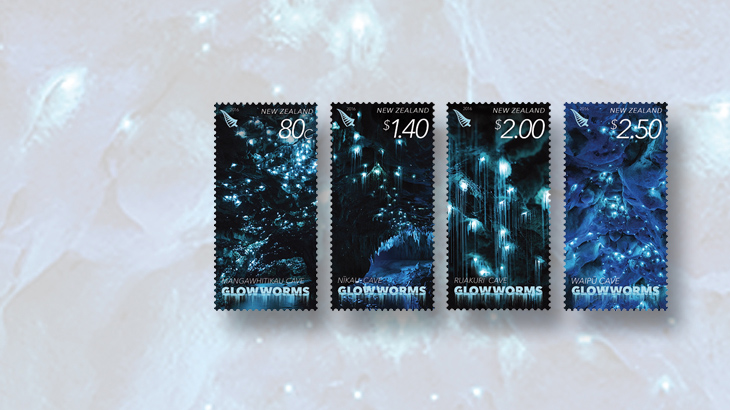 Four New Zealand stamps picturing glowworms glow in the dark. The stamps are being issued March 2.

New Zealand Post said, “The stamps have been printed using glow-in-the-dark technology to replicate the effect of glowworms in the wild — simply expose them to sunlight and then step into a dark space to see the stamps light up.”

Not really worms at all, glowworms are the larval stage of the fungus gnat (Arachnocampa luminosa). The blue-green light emitted from these larvae illuminates caves and other damp areas.

“The life cycle of a glowworm is about a year from larva to fly. During that period it casts the luminous glow for which it was named. The light is often an eerie blue and is stronger when the worm is hungry.”

The tourism website also compares looking at a cave ceiling filled with glowworms to “gazing at the stars on a clear night.”

The photographs reproduced on the stamps were taken by Joseph Michael, part of his series called Luminosity.

Michael said, “These long exposure photographs were captured in a number of limestone caves in the North Island. The 30 million year old formations form a majestic backdrop to the bioluminescence of the glowworms.”

The $2 stamp, which pays the international postcard rate, is available in two versions: one with traditional gum, and the other a self-adhesive.

Hannah Stancliffe-White designed the stamps, using Michael's photographs. Southern Colour Print printed them by offset. The gummed stamps are in sheets of 25 and the self-adhesives in a booklet of 10.