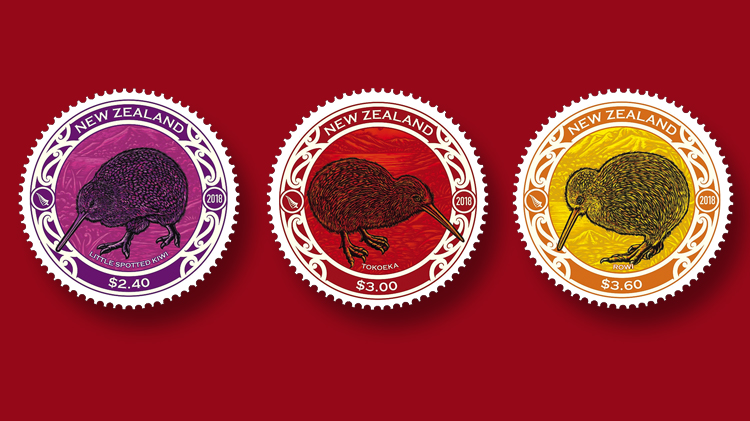 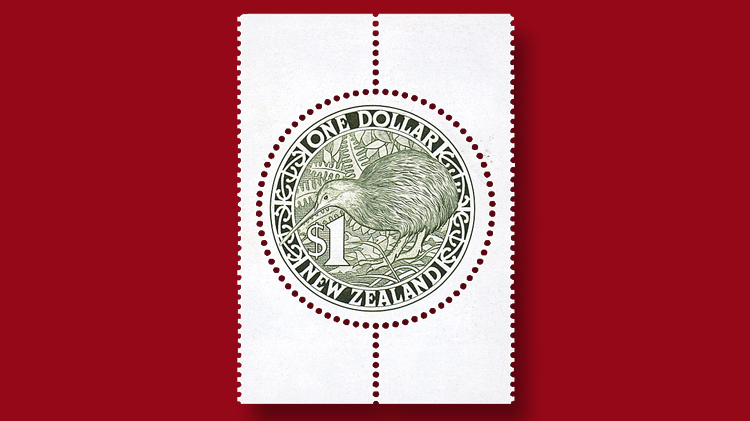 New Zealand introduced round Kiwi definitives in 1988 with this engraved $1 stamp, shown here with the surrounding selvage. 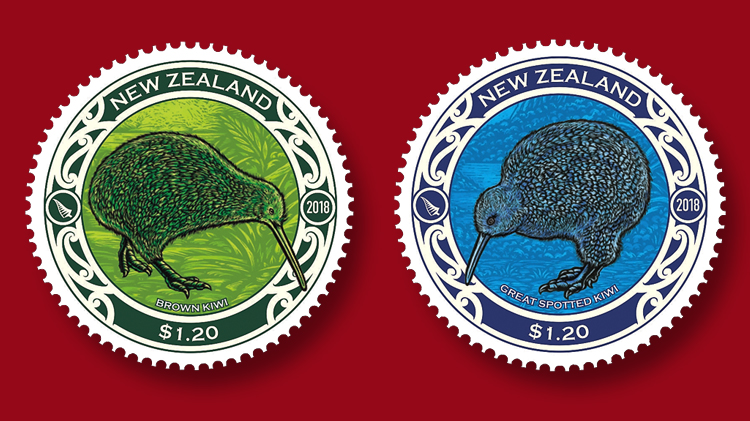 Two of New Zealand’s colorful new round Kiwi definitives are denominated $1.20, the domestic postage rate as of July 1. These stamps feature the brown kiwi and great spotted kiwi, respectively.
Previous
Next

New Zealand Post is updating its round Kiwi definitive stamps.

In announcing the five new stamps being issued July 4, New Zealand Post said: “To honour our beloved national bird, this popular stamp has been refreshed for the eighth time since 1988. The 2018 Round Kiwi features all five species of kiwi in their habitat, in a range of vibrant colours.”

Two of the new stamps are denominated $1.20 to pay the new basic domestic rate as of July 1. On one stamp, the brown kiwi (Apteryx mantelli) is shown in green with a green background. The other depicts a great spotted kiwi (Apteryx haastii) in blue.

Like all kiwis, the brown kiwi is a flightless, tailless bird with nostrils, hairlike feathers, and a long, curved beak, and like most kiwis, it is nocturnal.

Found on New Zealand’s North Island, the brown kiwi is the most well known of the kiwi species.

On the other hand, the great spotted kiwi is the least well known. It also is the largest, with females growing up to 20 inches tall, and males up to 18 inches. This kiwi can be found in the wild in a few locations on the South Island.

The smallest kiwi, the little spotted kiwi (Apteryx owenii), is featured on the $2.40 pink stamp paying the new rate for large domestic letters and the international rate for aerograms and postcards.

According to the New Zealand Department of Conservation, all little spotted kiwis are descended from a small number of birds released on Kapiti Island in 1912.

The $3 red stamp features the tokoeka kiwi (Apteryx australis), which has four geographically and genetically distinct forms. New Zealand Post describes these as “the critically threatened Haast, the mountain loving northern Fiordland and southern Fiordland, and the Rakiura (Stewart Island) which is unusual among kiwi for being active in daylight.”

The yellow $3.60 stamp shows the rarest of the kiwi species, the rowi (Apteryx rowi), also known as the Okarito brown kiwi. There is only one natural population of about 550 birds found at Okarito on the west coast of the South Island.

Dave Burke designed the new round Kiwi stamps. Southern Colour Print of New Zealand printed them by offset lithography in sheets of 20 and in a souvenir sheet with all five stamps.

For information about ordering New Zealand’s latest version of its round Kiwi stamps, visit the website or write to the Collectables and Solutions Centre, New Zealand Post Lt., Private Bag 3001, Whanganui 4541, New Zealand.