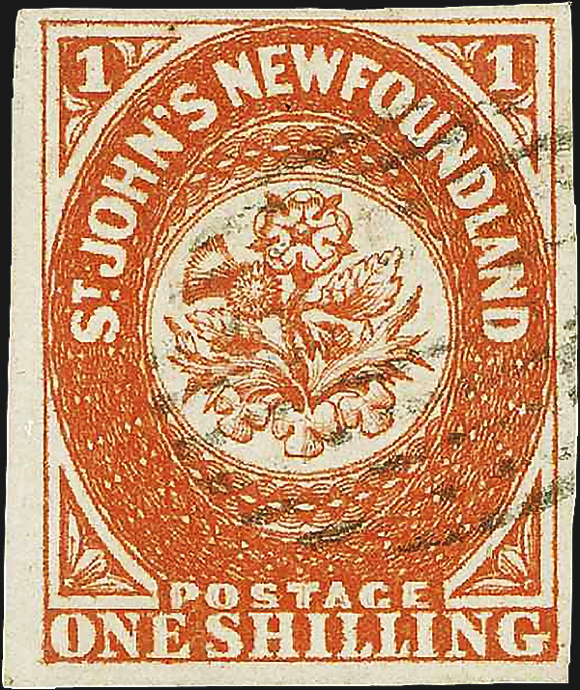 A key stamp of 19th-century Newfoundland, the 1857 1-shilling scarlet vermilion (Scott 9), will be offered during Eastern Auction's Feb. 20-21 sale.

The public auction is taking place at the Lord Nelson Hotel and Suites, 1515 South Park Street, Halifax, Nova Scotia, Canada. The individual lots are also posted for examination on the Eastern website at www.easternauctions.com. Bids are accepted in person, or by e-mail, phone, fax or postal mail.

The imperforate 1sh scarlet vermilion, the top denomination in the dominion's first set, is printed on thick white wove paper with mesh. The example on offer is used, with a lightly struck grid cancel. Eastern calls it "a remarkable example of this tremendously difficult classic stamp, possessing true rich colour, surrounded by unusually large margins unlike most examples we have offered in the past," and refers to it as one of the very few known examples in choice condition, "completely devoid of any flaws."

The stamp is accompanied by a 1974 certificate of expertization from the Royal Philatelic Society of London, with provenance attributed to "Maurice Burrus, Robson Lowe Ltd, April 1963; Lot 410."

The auction also features semipostals of the world, as well as Canada with specialized proofs, varieties, and an extensive selection of semi-Official airmails.

An extensive selection of Canada’s semi-Official airmails includes more than 350 lots of these stamps, which are listed in the Scott Classic Specialized Catalogue of Stamps and Covers 1840-1940. Scott identifies 52 major varieties issued from 1918 well into the 1930s.

“These fascinating stamps were instrumental in providing postal service to remote Northern locations beginning in 1924 and continuing for about ten years,” the auction catalog notes. “There are hundreds of varieties to acquire, and more are still being discovered as research continues.”

The stamps, proofs and covers are from the Keays collection of semi-Official airmails. The section begins with the first stamp, the 1918 Burning Zeppelin (Scott CLP1). The stamp is offered as mint single varieties, a tete-beche mint pane of two, a forgery of a color-missing error, and a two-color printed sign advertising the “Special Aerial Stamp” and depicting the zeppelin design, measuring 138 millimeters by 226mm (roughly 5.4 inches by 8.9 inches). Various on-cover uses will also be auctioned.

Many of these semi-Official airmail stamps are offered in full mint panes and blocks.