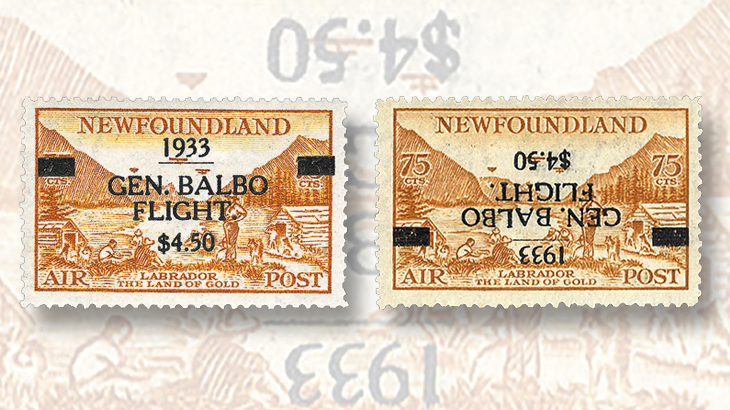 All of the Newfounland Balbo surcharges are said to have been carefully scrutinized for errors craved by collectors. Despite the best efforts of the checkers, who detected and tore up a block of four inverted surcharges, at least four others escaped into the marketplace. Shown here are both the normal stamp (Newfoundland Scott 18) and the inverted surcharge (18a). The inverted surcharge image courtesy Cherrystone Philatelic Auctioneers. 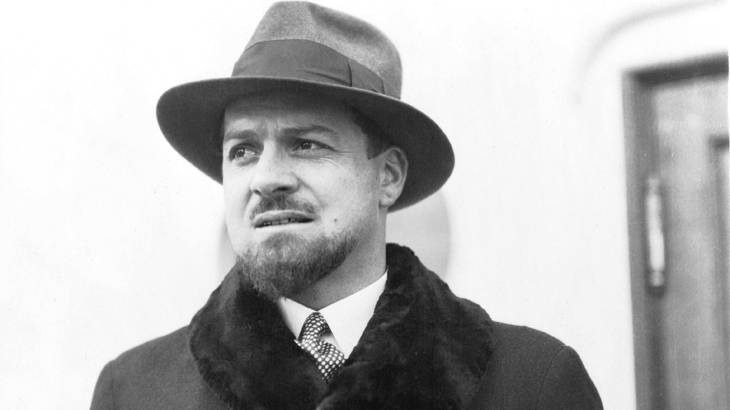 A 1929 photograph of Italo Balbo, who was appointed by Mussolini to rebuild Italy’s air force. 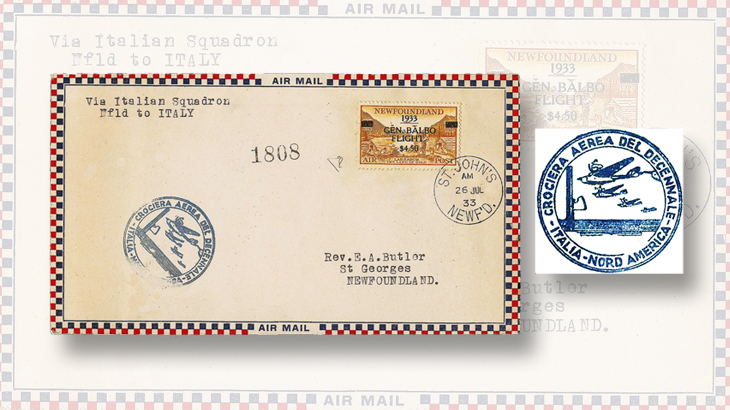 Some 1,153 pieces of Newfoundland mail were carried on the return flight to Italy after Balbo’s squadron stopped at tiny Shoal Harbour to refuel before crossing the Atlantic Ocean. The text of the cachet showing the flight and the fascist emblem translates as “Decennial Aerial Cruise / Italy - North America.” Image courtesy Robert A. Siegel Auction Galleries.
Previous
Next

Larger than Kentucky and slightly smaller than Tennessee, the island of Newfoundland became the first colony of Great Britain in 1583 and was the last province to join Canadian confederation in 1949.

Newfoundland is important in 20th-century postal history for the same reason that it was vital to Europeans from Leif Ericsson to Queen Elizabeth I: It was the nearest reliable landfall for mariners in this hemisphere.

That is why eastern Newfoundland also became the take-off and landing site for so many early attempts at transatlantic flight.

These pioneer attempts left a legacy of philatelic rarities, but not one of great success. Of the flights between 1919 and 1930 for which five Newfoundland stamps were surcharged (Scott C1-C5), only one succeeded in making a complete transatlantic crossing.

On June 15, 1919, 16 hours after they took off near St. John’s, Newfoundland, veteran British military pilots John Alcock and Arthur Brown plowed their twin-engine Vickers Vimy biplane safely into a bog at Clifden, Ireland.

Winston Churchill, then secretary of state for air, presented them with the £10,000 Daily Mail prize for the first crossing of the Atlantic Ocean in “less than 72 consecutive hours,” and a week later Alcock and Brown were knighted by King George V.

A decade and a half after this first rough and ready landing, swifter, more sophisticated aircraft made flight far safer, even over long distances.

By the late 1920s and 1930s, nations were interested in these sleek new airplanes. Not only could they fly higher, farther and faster, but they could also promote national prestige, a commodity hard to come by during the Depression.

One such nation was Mussolini’s Italy, which wanted a modern air armada to bolster its military power as well as its prominence as a progressive, forward-looking nation.

To head that effort, Mussolini chose one of his most trusted Blackshirt leaders, Italo Balbo.

A dashing figure with a proven record of bravery as an officer in World War I, Balbo also was a dedicated fascist who had helped bring Mussolini to power in 1922.

After a crash course in flying, Balbo rapidly rose to become head of the Italian air force in the 1920s, and made it his mission to impress the world with its prowess.

In December 1930 and January 1931, he led a dozen fast, high-flying, two-man Savoia-Marchetti S.55 flying boats from their anchorage in Tuscany to Brazil, a feat that drew attention on both sides of the Atlantic.

For 1933, Balbo set his sights on what would be the brightest spot on the world stage — the Century of Progress Exhibition in Chicago.

This time, he would lead 24 flying boats, with Lake Michigan as the glittering background for their arrival and a reception at the modernistic Italian pavilion, actually designed to resemble an aircraft.

The Newfoundland Balbo airmail stamp, like its other issues for special flights, is a surcharge on an existing stamp, and a profitable high-value surcharge to boot: $4.50 on a 75¢ stamp called Labrador, The Land of Gold (Scott C17). This was the high denomination in a set of five airmails issued June 9, 1933.

The Balbo surcharge was issued July 24, 1933, to go on mail Balbo’s squadron would carry back to Italy on its long return flight from the Windy City.

In its Dec. 7-8, 2011, auction catalog, Cherrystone Philatelic Auctioneers said that before the stamps were issued, freshly surcharged in black, “… four checkers were appointed to ensure that no errors were sold. The ‘DO-X’ Surcharge of 1923 [Scott C12] produced 50+ inverted surcharges and efforts were made to avoid the same mistake.”

Four seems like a lot of people to look at 8,000 stamps, although it might explain the smudges and even fingerprint traces visible on many of them.

At any rate, the extra effort failed. At least four inverted surcharges are known (C18a), and stamps from another surcharged block of four that was discovered and torn up were somehow “expertly repaired” and also ended up with collectors. (This explains why modern security printers incinerate their mistakes!)

Scott currently catalogs the two disturbed-gum inverted surcharges (Scott C18a) at $100,000, and the two mint never-hinged errors at $130,000, versus $325 unused, $500 mint, never hinged and $350 used for the normal Balbo surcharge (C18). Expertizing is recommended for these as well as other pricey varieties of Newfoundland’s 1933 airmails.

Covers are highly collectible as well, including the one illustrated here, which sold for $600 in a 2013 Robert A. Siegel auction in New York City.

All the covers appear to have been serially numbered. They also received a blue or turquoise cachet in Italy showing the airborne squadron and a bundle of rods with a projecting ax head, an ancient Roman symbol of authority revived as the symbol of Italian fascism.

In Italy, it was not a “Century of Progress” that the flight was celebrating, but the 10th anniversary of Mussolini’s consolidation of political power.