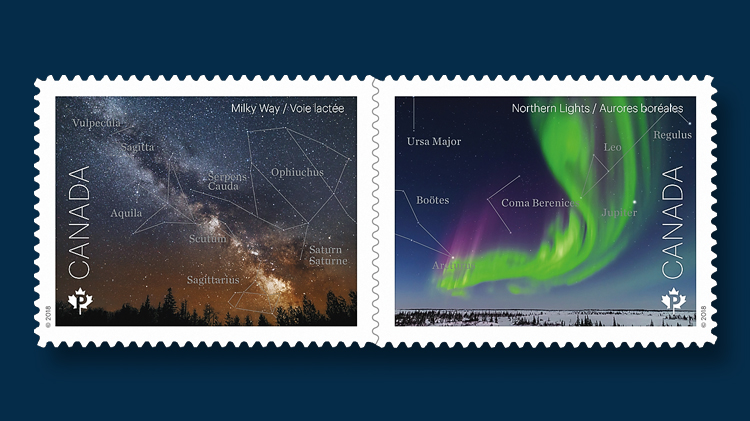 The Milky Way and northern lights photographs on Canada Post’s Astronomy stamps, issued June 29, were taken in 2016 by different Canadian photographers. The stamps mark the 150th of the Royal Astronomical Society of Canada.

On June 29, Canada Post issued two stunning stamp designs of the Milky Way and northern lights to mark the 150th anniversary of the Royal Astronomical Society of Canada.

The Astronomy stamps were issued in a booklet of 10 (five of each design) and in a souvenir sheet with the two designs se-tenant (side-by-side). Both stamps are nondenominated, permanent stamps. The emblem with a “P” inside a maple leaf indicates that they pay the basic domestic rate, currently 85¢.

The Royal Astronomical Society of Canada was founded in 1868 with the mission to educate the country about the universe, as well as to inspire curiosity. Today, the organization brings together more than 5,000 enthusiastic amateurs, educators and professionals in 28 centers across Canada.

Details, Canada Post’s magazine for collectors, said the stamp pair praises the organization’s “commitment to promote the study of astronomy through public outreach.”

The first stamp incorporates a photo of the Milky Way by nighttime landscape photographer Matt Quinn. The striking image was taken at the Bruce Peninsula National Park in Ontario.

“The sheer scale of the night sky puts into perspective the awesomeness we’re a part of and with this new perspective I’m reminded of what’s truly important and what isn’t,” Quinn said on his website.

The second stamp depicts Alberta-based Alan Dyer’s photo of the northern lights over Churchill, Manitoba. Like Quinn, Dyer is drawn to the night sky.

“Looking up rekindles a childlike sense of wonder that can add so much enjoyment to our lives,” Dyer said.

On his website, Dyer wrote about the June 29 unveiling ceremony for the stamps held at the Royal Astronomical Society of Canada’s annual general meeting in Calgary, Alberta.

“It is always a treat to see one of your images in print, but this is a rare privilege indeed,” he said.

Dyer also mentioned that both he and Quinn are members of the society.

Designed by Parcel Design of Toronto, each stamp includes hidden metadata printed in special ink in the border. Put the stamps under ultraviolet light to reveal the date and time the photograph was taken, its coordinates and type of camera lens used for the photo.

The stamps were designed with lines and names overlaid on the images to highlight constellations.

Canada Post previously issued two stamps April 2, 2009, in two formats for the International Year of Astronomy (Scott 2323, 2324-2325). Those 54¢ stamps picture the Dominion Astrophysical Observatory in British Columbia with the Horsehead Nebula, and the Canada-France-Hawaii Telescope in Hawaii with the Eagle Nebula.

The northern lights have also been shown on previous Canadian stamps, including the 1967 1¢ Northern Lights and Dog Team definitive stamp (Scott 454) and the 2018 $2.50 Far and Wide definitive stamp depicting a photograph of Arctic Bay on Baffin Island (3069, 3078).

The souvenir sheet (Canada Post 404086145) measures 90mm by 100mm, and the two stamps in it have traditional moisture-activated stamp gum. A total of 85,000 souvenir sheets were printed.

The booklet cover and the FDC include astronomy-themed illustrations: a satellite, a celestial body and the Plaskett Telescope at the Dominion Astrophysical Observatory in Victoria, British Columbia (an organization celebrating 100 years in 2018). Irene Laschi created the illustrations.