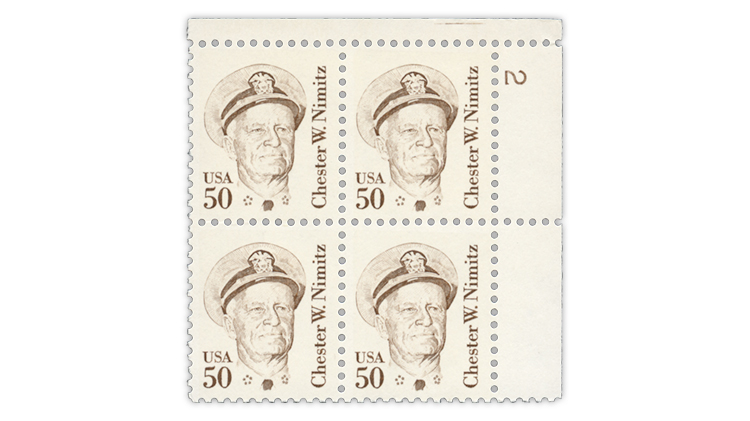 This plate block of the 1985 50¢ Chester W. Nimitz stamp is printed with a newly reported variety of block tagging. The luminescent tagging, which is not visible under regular light, is pictured in a photograph on the next slide as it appears when exposed 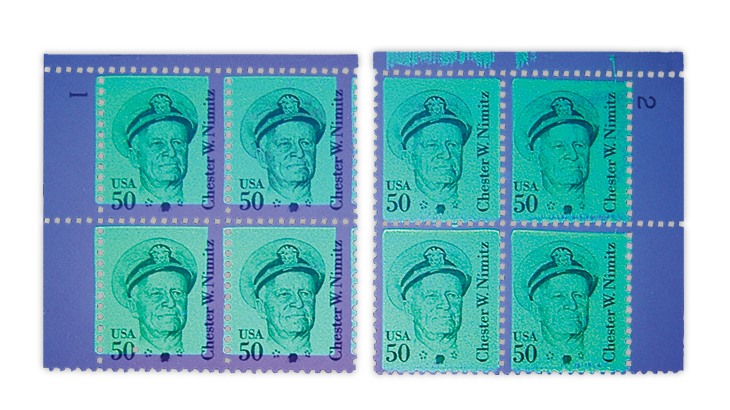 Two different varieties of the 50¢ Chester W. Nimitz stamp as plate blocks, photographed side-by-side under shortwave ultraviolet light. The block at left with the No. 1 plate number is Scott 1869a, which is now being described in the Scott catalog as “me
Previous
Next

Among the editorial changes found in the new 2019 Scott Specialized Catalogue of United States Stamps and Covers is a revised listing for certain varieties of the 1985 50¢ brown Chester W. Nimitz stamp.

Following a recent report of a new tagging variety for the definitive issue, Scott catalog editors revised the wording of one minor listing for the Nimitz stamp and also added a new minor listing.

Like many stamps of the 1980-99 Great Americans definitive series to which it belongs, the 50¢ Nimitz can be found in multiple varieties that include two different perforation gauges (10.9 and 11.2), two different gum types (dull and shiny), as well as different paper types and tagging types.

Last year’s 2018 Scott U.S. Specialized catalog identified the previously known block-tagged stamp as Scott 1869a with “large block tagging.” That listing has been reworded in the 2019 catalog to describe the same stamp as having “medium block tagging.”

The new addition to the 2019 catalog is Scott 1869f, which is the discovery with larger tagging blocks. It is described as having “large block tagging.”

The luminescent tagging compound, which is visible under shortwave ultraviolet light, nearly extends across the entire stamp from perforation to perforation.

A note following the various minor listings for Scott 1869 clarifies the differences between the two types of block tagging.

Bob Derkits of Tennessee, a longtime dealer on Linn’s ZillionsofStamps.com, made the new discovery while checking tagging varieties on a recent purchase.

“I bought a large collection of unused U.S. and quickly processed the commemoratives into my stock,” Derkits told Linn’s. “Then I started going through the definitives, checking for varieties.”

He found a plate block of the Nimitz stamp and noticed the tagging was considerably larger than the other examples in his stock.

Derkits sent his plate block of four stamps, showing plate No. 2 in the attached margin, to Donna Houseman, editorial director for the Scott catalogs.

His plate No. 2 block is shown here photographed under shortwave ultraviolet light alongside a plate block showing plate No. 1 whose stamps show the medium block tagging.

Kloetzel approached the new finding with caution, explaining that he had previously examined an example of a tagging spill on the Nimitz issue that made the tagging appear larger than normal. However, he had identified that example with the spill as a variation of the more common block tagging now described as “medium.”

After examining the plate block submitted by Derkits, Kloetzel verified the four stamps in the block represent a new and different variety.

Describing the tagging blocks as “crisp and even” on each stamp from Derkits’ plate block, Kloetzel created the new listing and authored the change in the previous listing.

Derkits told Linn’s he has since found other examples of the new large block tagging variety on the Nimitz issue: a used example and a dull-gum example.

“So this variety is out there,” he added. “Collectors just need to start looking for it.”