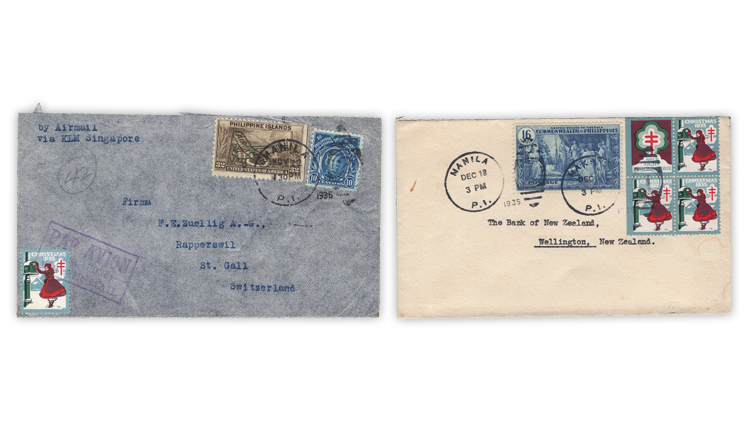 Among the COVID-19 pandemic’s undesirable effects on the stamp hobby is the fact that collectors who love to paw through dealers’ boxes of covers in person have been sitting at home staring at computer screens — or worse, staring at the ceiling. The result is that I have no new earliest-known uses (EKUs) of United States Christmas seals issued from 1907 to 1935 to report this year.

From 1936 onward, there were designated first days of sale for Christmas seals.

Why are there so many Christmas seal EKUs from the Philippines?

My theory is that the first shipments of seals from the printers in the United States were sent to the Philippines by ship and that the seals had to be sent as early as possible because of the distance involved and the possibility of shipping delays. On top of that, there was the week or more it would take mail bearing the seals to get from the Philippines to the U.S. mainland.

Upon arrival in the Philippines, the packages of Christmas seals must have been opened, and the seals made available in the distribution chain.

U.S. Christmas seals used in the Philippines under the U.S. administration is a specialty that has several active and enthusiastic collectors, including me.