No new U.S. Christmas seal earliest-known uses to report this past year

If anyone can advance any EKU date for a Christmas seal in this chart, contact the author, John Hotchner, Box 1125, Falls Church, VA 22041, or by email at jmhstamp@verizon.net. 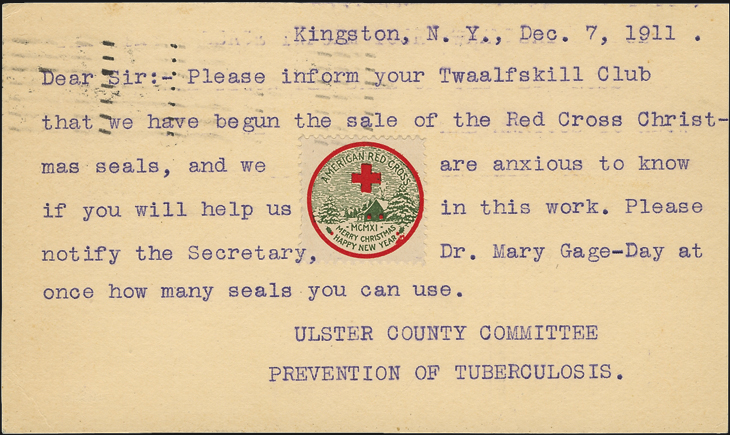 Like the Nov. 24, 1911, postal card illustrated nearby, this card represents a marketing effort for the 1911 Christmas seal. The seal is attached to the back of this card, which includes a message dated Dec. 7, 1911. The Kingston, N.Y., cancellation on th 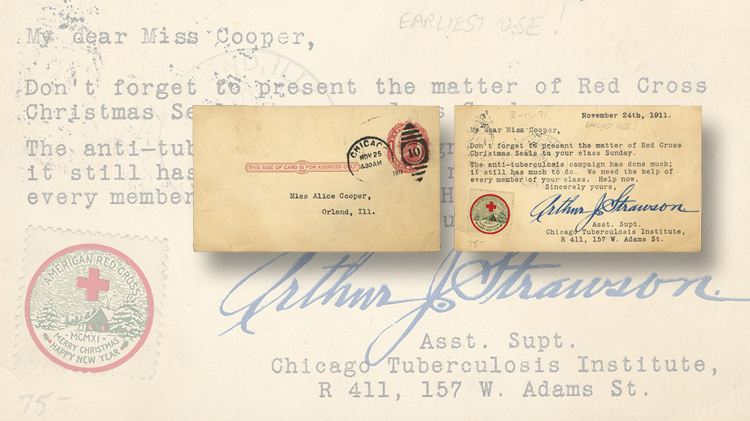 Shown front and back, this 1911 postal card is a match for the earliest-known use date, Nov. 24, of the Christmas seal on the back.
Previous
Next

Normally the earliest-known use (EKU) of a Christmas seal has to be tied to a card or envelope by a cancellation to qualify for a listing, but in the case of the postal card shown nearby, we can allow a little leeway.

The two-paragraph message reads: “Don’t forget to present the matter of Red Cross Christmas Seals to your class Sunday.

“The anti-tuberculosis campaign has done much; it still has much to do. We need the help of every member of your class. Help now.”

It is signed by the assistant superintendent of the Chicago Tuberculosis Institute.

Why is establishing this date of use important? It is because it matches the EKU date on the nearby chart.

Shown with this column is a similar use of the 1911 seal on another marketing card. This one is tied to the card by part of the message. Dated Dec. 7, 1911, this card is signed by the Ulster Country Committee for Prevention of Tuberculosis, of Kingston, N.Y.

Prior to 1936, Christmas seals were released as local tuberculosis associations made them available. From 1936 on, there were formal first days for Christmas seals.

I began reporting the known EKU dates in 1999, and in the intervening years almost every EKU has changed. At first, the list included 14 EKU dates in December. Now only one remains, and this 1918 EKU has not moved from Dec. 2 as reported in 1999.

Experts feel that this date will never be moved to November. Why? Because of World War I, the seals were not sold in the usual manner, and were distributed late.

This is the first time in 17 years that there are no new EKUs on the chart.

If anyone can advance any EKU date for a Christmas seal in the chart shown above, contact me, John Hotchner, Box 1125, Falls Church, VA 22041, or by email at jmhstamp@verizon.net.

For collectors with an interest in Christmas seals, I recommend the national club that delves into the history of these seals and their many varieties and uses. It is the Christmas Seal and Charity Stamp Society.

The society publishes catalogs for U.S. and foreign seals. It also publishes an excellent journal, Seal News, that highlights both modern and older material, and conducts a club auction.

Annual dues are $20.  More information about the group is available on its website, or from Lou Caprario, secretary-treasurer, 91 Fairview Ave., West Orange, NJ 07052.