No postal rule, but reality of remailing unclaimed, undeliverable mail

This Jan. 24, 1944, airmail letter sent from Washington, D.C., to New Orleans was unclaimed at the original address and returned to the sender, who used the same envelope to mail it, with new postage added, to the Legation of Finland in Bern, Switzerland. 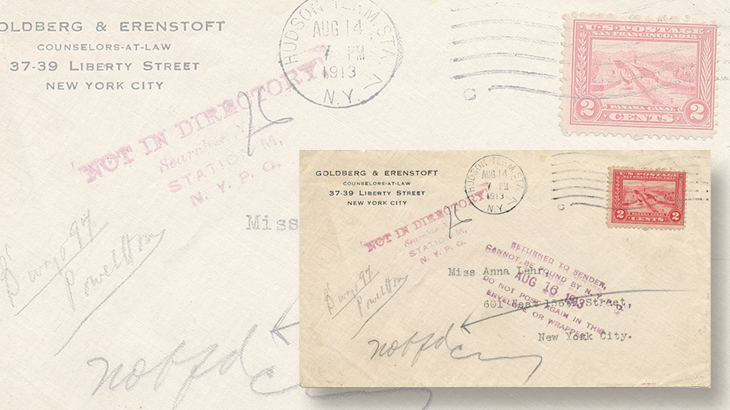 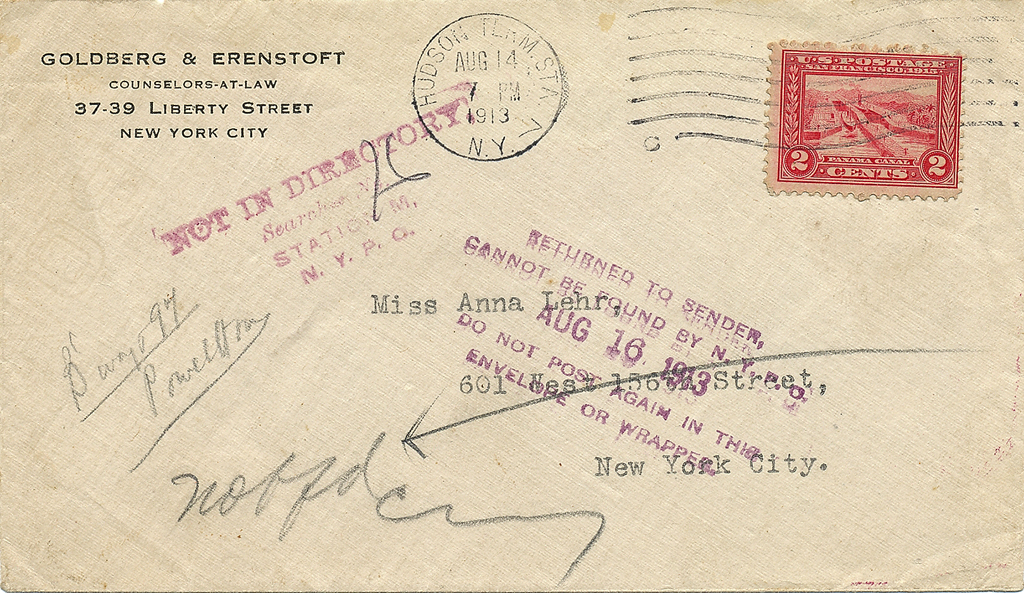 This Aug. 14, 1913, misaddressed, undeliverable letter exemplifies the postal regulation specifying that such items could be remailed only in a new envelope with new postage.
Previous
Next

In this column I will discuss unclaimed, undeliverable mail (i.e., not delivered because it was not claimed at the office of delivery) that was subsequently remailed.

The process by which this mail was handled is not clearly and directly expressed in official postal documents, whereas the manner in which misdirected (misaddressed), undeliverable mail was to be handled was clearly communicated in the regulations as early as 1881.

For instance, in the May 20 to June 20, 1881, United States Official Postal Guide, we find this instruction in Ruling 523: “If the address of the person is insufficient (the item is misaddressed or misdirected), and the letter is returned to the writer as uncalled for, it cannot be remailed without a new payment of postage.”

This statement is eminently clear for misdirected mail that is undeliverable. Misdirected, undeliverable mail clearly could not be remailed without a new payment of postage.

In contrast, the fact that unclaimed, undeliverable mail that was returned to sender could be remailed only with the payment of new postage is evident only by noting covers, such as the one shown here in the first illustration.

This Aug. 14, 1913, undeliverable letter from one New York City address to another was “RETURNED TO SENDER” because the addressee “CANNOT BE FOUND.” And, more important, we also see the following admonition on the letter: “DO NOT POST AGAIN IN THIS ENVELOPE OR WRAPPER.” So, to remail this letter, a new envelope and new postage were required.

As clear as this admonition is (and it was needed often enough that a rubber stamp had been made for it), I am unable to find a specific official rule or regulation that confirms such statements, which are frequently found only on letters such as this one.

To date I have seen such an admonition on letters mailed as early as 1899. I believe I have seen examples on letters from the mid-1880s, but I don’t have such a cover available to me at this moment.

In actual fact, using a new envelope with new postage is only one way in which unclaimed, undeliverable letters may be remailed.

Another way in which this remailing can occur is shown on the remailed, unclaimed, undeliverable letter in the second illustration, where the remailing was accomplished by applying new postage to the original envelope.

There it was remailed by addressing it to the Finnish Legation in Bern, Switzerland, franking with the required new postage — 5¢ in five 1¢ Liberty Holding the Torch of Freedom and Enlightenment stamps (Scott 908) paying the 5¢ surface rate for an up-to-one-ounce letter to a Universal Postal Union country. For the remailing, new postage payment was made, but the original envelope was reused.

Note that the “UNCLAIMED AT ROOSEVELT HOTEL” marking, Washington and New Orleans postal markings, the ”Return to Writer” marking and the original 6¢ postage ALL were overwritten in blue pencil, thus indicating that the remailing was a new process that was independent of what happened before to the letter. In my experience, such remailing is rarely seen.

Tony Wawrukiewicz and Henry Beecher are the co-authors of two useful books on U.S. domestic and international postage rates since 1872. The third edition of the domestic book is available from the American Philatelic Society, and the international book also may be ordered from the APS.