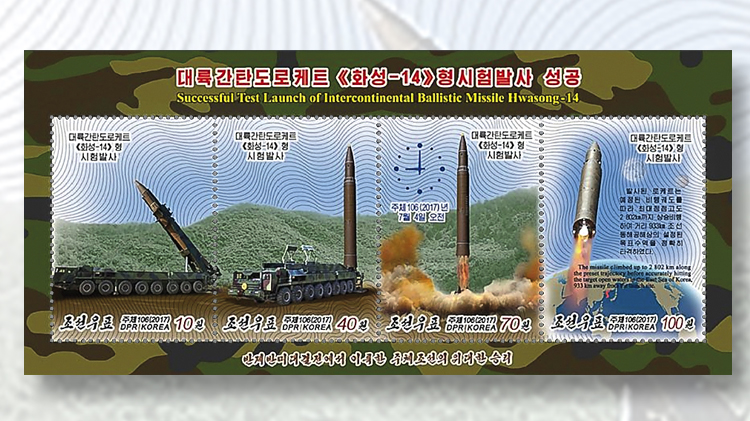 A new set of stamps from North Korea commemorates the test launch of intercontinental ballistic missiles in July. In addition to this pane of four, the set includes a single stamp and souvenir sheets.

Stamps from North Korea are in the news again.

ABC News, Reuters, British newspapers, and others reported in early August on a new set of North Korea stamps and souvenir sheets commemorating the test launch of intercontinental ballistic missiles in July.

The Korean Central News Agency in Pyongyang reportedly released images of the stamps Aug. 8, but the exact issue date of the stamps is not known.

The stamp set is reported to include the pane of four se-tenant stamps shown here, a single stamp, and two souvenir sheets each with a 50-won stamp.

Each item in the set includes the inscription, “Successful Test Launch of Intercontinental Ballistic Missile Hwasong-14” in English, either as part of the stamp design or in the selvage.

Rather than show a missile, the 50w stamps in the souvenir sheets depict photographs of North Korea leader Kim Jong Un. One stamp shows him signing the order to launch, and the other depicts him celebrating after the launch.

The ABC News report by Michael Edison Hayden described the designs: “Another stamp shows Kim and a military leader pumping their fists in celebration, with the country’s flag waving high above planet earth and a missile shooting off beside it. Several stamps feature close-up hero images of the missiles.”

Previous stamps from North Korea have commemorated events that led up to the intercontinental ballistic missile launch, including the launch of the Kwangmyongsong 2 rocket in 2009 (Scott 4855), and the Kwangmyongsong 3 in 2012 (5147).

In July, a set of North Korean stamps with an anti-American theme received widespread media attention.