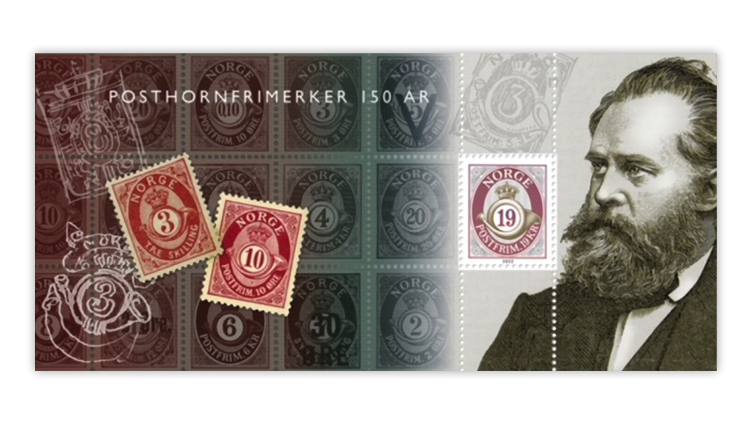 Posten said in its new-issue announcement: “In 1872, probably very few people knew of the event that took place in the history of philately that year. Now we know. Norway’s post horn stamps would eventually become the world’s oldest, unbroken series of stamps.”

The souvenir sheet contains one 19-krone stamp. The selvage shows a selection of other Post Horn stamps, stamp sketches and a portrait of Andreas Friedrich Wilhelm von Hanno, who designed the first Post Horn stamps for Norway 150 years ago.

When von Hanno received the commission to design the stamps, he already was a well-known architect, sculptor and teacher who had designed various buildings in Oslo, including churches, a school, a fire station and police station.

The basic stamp design of the post horn and crown has changed little in the past 150 years despite numerous different printers, printing techniques and designers.

Posten said: “The new stamps were issued in all the colours of the rainbow with a metallic gold crown and horn and silver under the wings, creating a series that is simultaneously on-trend and classic — a worthy 150-year-old world record holder!”

Posten credits Morken and Finger with the design of the Oct. 1 souvenir sheet. Joh. Enschede Security Print printed it by offset in a run of 60,000 sheets.