Nostradamus is surging with topical collectors 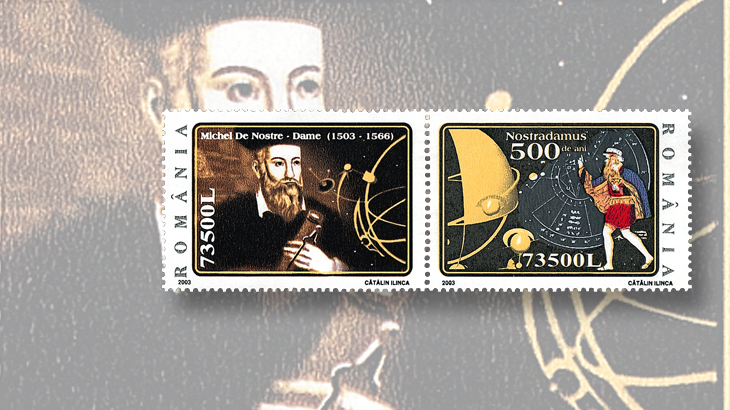 Romania’s Nostradamus se-tenant pair (Scott 4592) is a good buy in mint never-hinged condition at $4. The two stamps were issued July 2, 2003, to commemorate his 500th birth anniversary.

Nostradamus is a name that most people know, even if they don’t know much about the man behind the name.

Leaving the University of Avignon after an outbreak of the plague, he became a traveling apothecary, experimenting with herbal remedies. In 1522, he enrolled in the University of Montpelier to study medicine, but, according to some accounts, he was expelled when it was discovered that he had worked as a tradesman (apothecary) and had been critical of some doctors.

Marriage to a rich widow relieved him of the necessity of working, and he began to study astrology and the occult.

He wrote The Prophecies, a sprawling collection of predictions of things that would happen in the distant future; and The Almanacs, published annually from 1550 until his death in 1566, which also contained prophecies.

Popular in his time, Nostradamus enjoys an even wider following today. His prophetic works remain widely read because they were set in what was for him the far distant future and because they are specific enough to tantalize, yet vague enough that virtually anything can be read into them.

On July 2, 2003, the 437th anniversary of his death, Romania issued a se-tenant pair of Nostradamus stamps (Scott 4592). These stamps fit well in topical collections of medicine, astrology and the occult.

The 2016 Scott Standard Postage Stamp Catalogue values the mint se-tenant pair at $9. It is selling at around $4 at present, and we think it is a good buy at that price.

Supply currently exceeds demand, but, if we may offer a prophecy, that is likely not to be the case in the future.