Not exactly a Christmas message in 1983 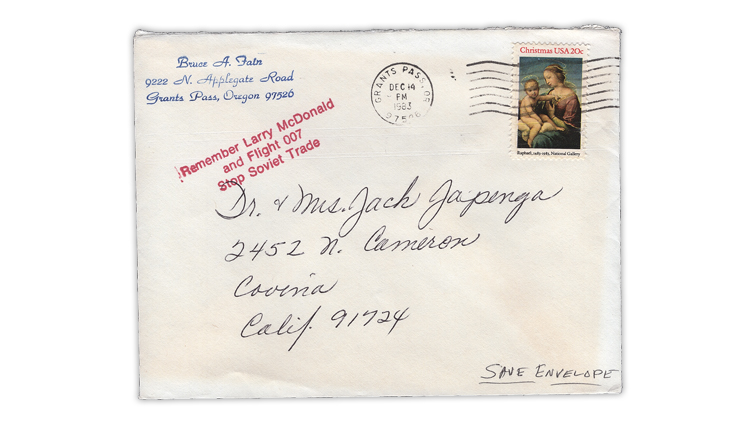 Christmas cards are not ordinarily a palette for political statements, but on this envelope sent in December 1983, it is understandable that the sender was venting his outrage.

A Christmas card with a non-Christmas handstamped message, such as the one shown here, is something that might not have Miss Manners’ approval. But in 1983, an exception might have been allowed given the outrage when the Soviet Union shot down a Korean commercial airliner that had strayed into Soviet airspace.

On Sept. 1, 1983, Korean Air Lines Flight 007 was on its way from Anchorage, Alaska, to Seoul, South Korea. The Soviet air defense forces assumed the errant flight path was a provocation by a spy plane, rather than a navigational mistake by the crew. The result was that the pilot of a Soviet interceptor fired missiles at the 747, which then crashed into the Sea of Japan west of Sakhalin Island.

The Soviet Union at first denied the incident but later admitted to shooting down the 747.

But despite worldwide understanding that this was no accident, the Soviet Union maintained its innocence. The Soviet Union had been expecting another U.S. aerial reconnaissance flight, but these flights, which had been going on for years, were careful to stay out of Soviet airspace.

With this as context, is it any wonder that anti-Soviet emotions were running high in December 1983 and that some of that would spill over into Christmas celebrations?