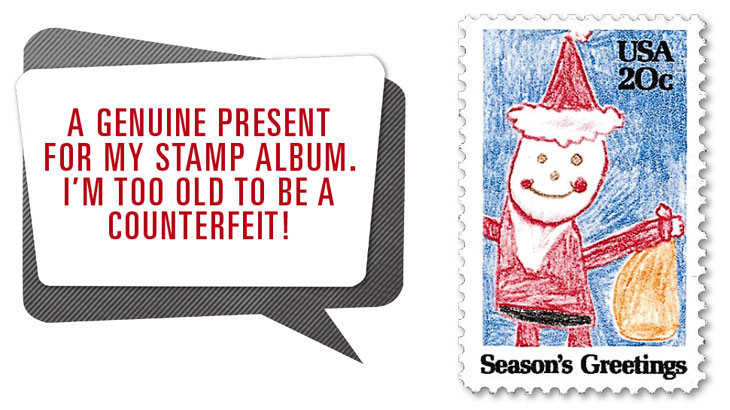 Supply chain problems seemed to be on the minds of many Linn’s readers who entered the November cartoon caption contest. It featured the 1984 20¢ Christmas stamp (Scott 2108) based on a drawing by then 7-year-old Danny LaBoccetta.

Will the elves be able to make enough presents for everyone this year? Mary Lou Moseley of Owensboro, Ky., suggests the answer may be “no,” with this entry, “My bag of toys might not be quite as hard to get down the chimney this year!”

What’s in Santa’s bag on this stamp? Dave Schwartz, of Commack, N.Y., represents several similar responses with “Who asked for this bag of kiloware?”

COVID-19 status was a reference point for many, with “No Mask? Here’s your sack of Coal!” proposed by Bennett Bardfeld of Vineland, N.J.

The mushrooming incidence of modern stamp counterfeits familiar to Linn’s readers inspired John Debord of Vallejo, Calif., who won the philatelic part of the contest.

The winner of the nonphilatelic line in the contest was David Epps of Portland, Ore., with “North Pole? No, I’m from Amazon!”

“What, no chimney? That’ll be an extra 50¢ surcharge,” by Terry Meier of Tampa, Fla.

“Welcome to Christmas on Elm Street” from George Schaetzle of Sheboygan, Wis.

“This slimmed down version of me avoids having to put me on a souvenir sheet,” from Frank Schmitt of Rockford, Ill.

“Dang! I grabbed the mail bag instead of the gift bag,” by James T. Smith of Etowah, N.C.

“Sack it to me!” from Steve Kotler of San Francisco, Calif.

Thanks and a tip of the hat to all who entered. The next contest will be announced in the Jan. 10, 2022, issue of Linn’s.