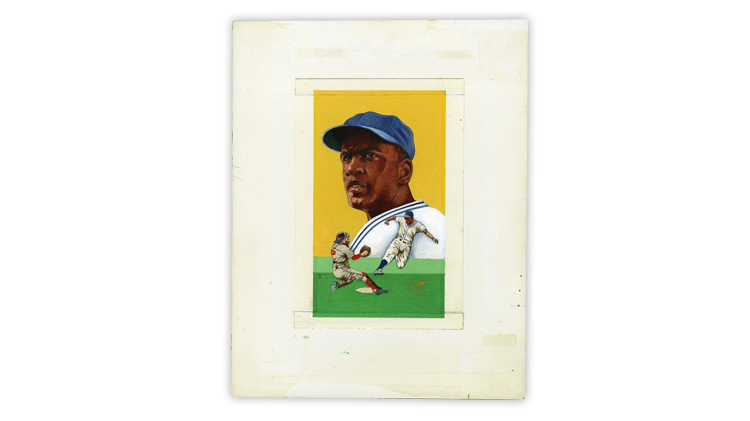 Jerry Pinkney’s approved artwork for the United States 1982 20¢ Jackie Robinson stamp from the Black Heritage series is one of many philatelic items on display at the “Baseball: America’s Home Run” exhibit at the National Postal Museum in Washington, D.C.

Stephen Tsi Chuen Wong put it succinctly when describing what the new baseball exhibit at the Smithsonian National Post Museum does.

The exhibit “puts flesh and bones” on the sport and brings it to life, said the Hong Kong writer and collector at the April 6 preview of what the Washington, D.C., museum expects to be one of the most popular attractions it has had since its opening in 1993.

“Baseball: America’s Home Run” opened to the public on April 9 and is scheduled to run through Jan. 5, 2025.

Wong, author of a Smithsonian book about baseball, is in a good position to know a lot about the exhibit, which he helped develop.

On display are three historic baseball uniforms he loaned the museum: Jackie Robinson’s Brooklyn Dodgers road jersey from 1948, the year after he integrated Major League Baseball in 1947; Joe DiMaggio’s New York Yankees home jersey from 1936, his spectacular year as a rookie; and Lou Gehrig’s Yankees road jersey from 1937-39, with a patch noting the 1939 centennial of the sport’s birth.

But as Daniel Piazza, chief curator of the museum, said, that celebration of baseball’s centennial and the United States 1939 3¢ commemorative stamp (Scott 855) that honored the anniversary were somewhat suspect.

The stamp marked “the 100th anniversary of an event that never took place,” Piazza said.

President Franklin D. Roosevelt, an avid stamp collector, ordered the 3¢ Baseball Centennial stamp, and his postmaster general, James A. Farley, a Yankees fan, was all too willing to cooperate. The stamp was issued June 12, 1939, about two months after the April 17 opening day of the 1939 season.

The idea that Doubleday, a Civil War hero, invented baseball was a myth created by a Colorado miner, according to a book on the sport.

Most historians agree the roots of the game go back perhaps 100 years before 1839.

The 3¢ Baseball Centennial stamp was issued at the opening of the National Baseball Hall of Fame and Museum in Cooperstown, N.Y.

“Collectors bought their stamps and serviced first day covers at the post office across the street, then had them autographed by some of the legendary players in attendance,” Piazza said.

“There are covers with contemporaneous autographs of Cy Young, Babe Ruth, Ty Cobb, Walter Johnson, Connie Mack, Nap Lajoie — I think any one of those would look grand in anybody’s personal collection as a souvenir of one of the greatest events in baseball and U.S. history,” he said.

Piazza said there must have been thousands of baseball expositions, but the National Postal Museum’s exhibition might be the first that shows the role stamps played in helping promote the sport.

And it was not just U.S. stamps. A number of countries had already celebrated the sport before the United States got into the act in 1939.

Piazza also noted that the museum is located on the site of Capitol Grounds, a Washington ballpark where baseball great Connie Mack began his professional baseball career.

As for the exhibit, it will showcase some of the more than 60 U.S. stamps that celebrate the game.

On display is the approved stamp artwork by Jerry Pinkney that marked Robinson’s first appearance on a U.S. stamp, a 1982 20¢ Black Heritage commemorative (Scott 2016).

The exhibit also features tributes to many of the Black athletes who were unable to play in the major league. A number of them picked up postal jobs to supplement their meager earnings from the leagues where they could play.

Located at 2 Massachusetts Ave. NE on Capitol Hill, the National Postal Museum is open daily from 10 a.m. to 5:30 p.m. Admission is free.