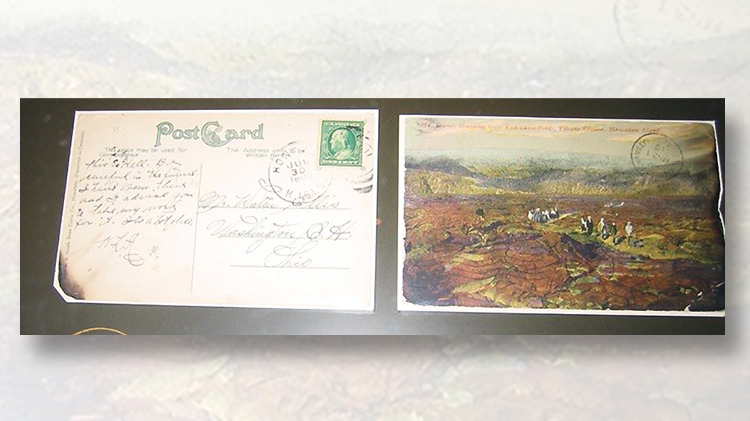 Tourists used to stick postcards in hot lava to burn their edges before mailing them from a volcano park in Hawaii. The singed card shown here is part of the National Postal Museum’s new exhibit honoring the centennial of the National Park Service. 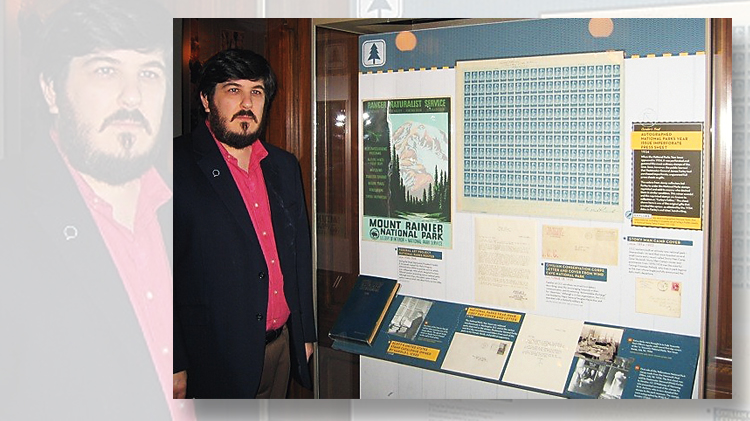 Daniel Piazza, philatelic curator of the National Postal Museum in Washington, D.C., stands by a display case holding a sheet of the uncut “Farley’s Follies” stamps. The sheet and numerous other objects are highlighted in the museum’s new exhibit, titled
Previous
Next

About four years ago, a National Park Service official met with representatives of the Smithsonian Institution’s Washington museums.

The park service was planning its centennial for 2016, and it wanted the museums to help mark the occasion with exhibits that would tell of its remarkable story.

On June 9, the National Postal Museum is opening the doors to its response to that challenge.

Daniel Piazza, philatelic curator for the NPM, who liked the idea of marking the 100th year of the National Park Service, has created a colorful exhibit that documents the many “intersections between the mail and the parks.”

The exhibit, in the postmaster’s suite at the Capitol Hill museum, will, as Piazza explained during a preview tour, “bring some of the outdoors indoors.”

Petrified rocks, pinecones and park signposts are there, to be sure.

But Piazza also has uncovered some fascinating postal artifacts that make vivid the roles that the United States Postal Service continues to play in the nation’s parks.

There are also some surprises, including something that park rangers call “conscience mail”: unauthorized souvenirs that park visitors have collected during their visits and, often years later, mailed back to the parks with notes of apology.

Piazza has collected some of the returned items, including pinecones, rocks and signposts. There are other items, probably unknown to many collectors.

For me, one surprise was the fact that former president Dwight D. Eisenhower used a postage meter for his franked mail at his Pennsylvania farm. An envelope bearing his metered frank is on display.

The link to the National Park Service? Ike’s Gettysburg farm is one of many National Historic Sites managed by the park service.

Another postal oddity comes from the Hawai’i Volcanoes National Park where early tourists were allowed to venture over the smoldering lava flows.

They would stick postcards into the fissures, which scorched the cards’ edges, and then mail the cards back to relatives. Quite a souvenir.

That was the secret drop for mail to the scientists who were working on the atomic bomb at the Los Alamos National Laboratory during World War II.

Piazza visited a number of the Western parks as he prepared the exhibit, discovering they are often vast in size and remote.

Mail service remains a vital link to urban areas for rangers and park employees, he said.

When he visited Arizona, he discovered a tiny post office, occupied one hour a day by a highway contract mail carrier who would open the small post office in the Petrified Forest National Park.

The park, located in northern Arizona, is distant from cell and Internet services, so the rangers and their families depend on the mails for entertainment, he said.

“The larger story isn’t postcards and trinkets,” Piazza said. It is that mail remains a vital service for people in the remote areas of the country, like the parks, Piazza observed.

Piazza has documented the well-known story of the Postal Service using mules to get mail to the people who live on the bottom of the Grand Canyon in Arizona, but he also found that a hotel on the bottom uses its own mules to carry mail to the top of the canyon.

It marks each letter with a notation stating it was carried by mules. A saddleback pack used to carry the mail up the canyon is on display.

Piazza also discovered some of the little-known revenue stamps issued by the National Park Service and required for house trailers pulled into the several Western parks by tourists, a practice ended in the early 1950s.

One of those stamps, purchased by the museum with sale of its excess U.S. revenue stamps several years ago, comes in a faded blue folder with the hand-stamped warning: “Feeding bears is prohibited.”

There is also the stamp album of a youthful Ansel Adams, who Piazza believes apparently stopped collecting after he was given a camera and began photographing the parks.

The album is opened to the Trans-Mississippi Exposition issue of 1898, one of the classic views of Western life on U.S. stamps.

Piazza said he is hopeful the stamps might have helped interest Adams to create his own classic views of the West.

The exhibit, titled “Trailblazing: 100 Years of Our National Parks,” is scheduled to run until March 25, 2018.