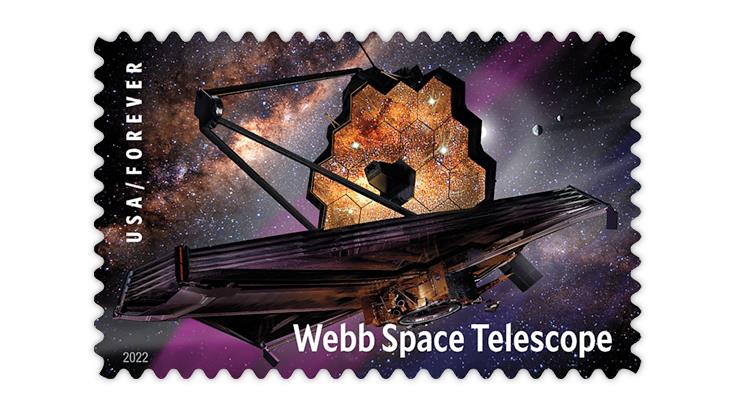 A United States nondenominated (60¢) commemorative forever stamp picturing the James Webb Space Telescope set against a stylized scene of galaxies, stars and planets will be issued Sept. 8 at the Smithsonian National Postal Museum in Washington, D.C. 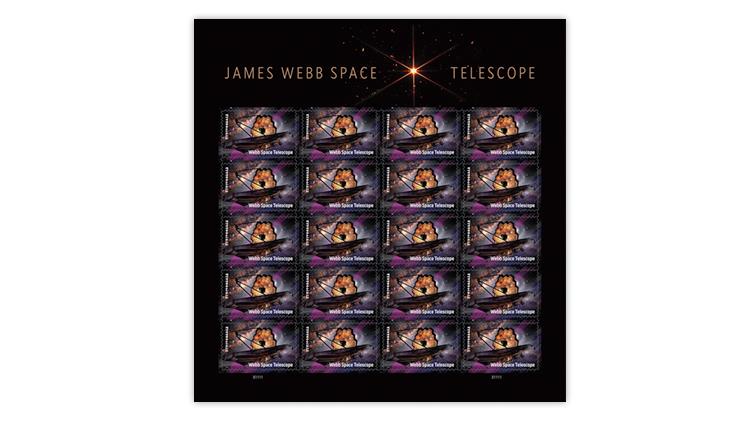 The wide selvage header of the James Webb Space Telescope pane of 20 shows an image of a distant galaxy cluster from 4.6 billion years ago that was taken by the telescope.
Previous
Next

On Sept. 8, a little less than two months after the first picture from the James Webb Space Telescope was released to the public, the United States Postal Service will issue a stamp celebrating the astronomical instrument and its remarkable imaging capabilities.

Collectors who wish to attend the free public ceremony are encouraged to register with the USPS. Each attendee may invite up to four additional guests, the USPS said.

Production details for the stamp state that Banknote Corporation of America printed a quantity of 30 million stamps, which were finished into 1.5 million panes of 20 for sale at post offices and other outlets approved to sell stamps by the Postal Service.

Die-cut and imperforate uncut press sheets of six panes also will be available for purchase from the Postal Service’s online Postal Store.

The Postal Service’s preliminary artwork for the pane, as seen here, shows the 20 stamps arranged in five rows of four each. “James Webb Space Telescope” is printed in capital letters across the wide selvage margin at the top of the pane.

According to the USPS, the selvage features a photograph of a star and distant space that the telescope took “early in its mission, brilliantly confirming the perfect alignment of the telescope’s 18 mirror segments.”

Noyes’ carefully rendered image of the telescope is set against a stylized depiction of stars, galaxies and planets in space.

“USA/FOREVER” is printed reading up on the left side of the stamp, and “Webb Space Telescope” is lettered across the bottom. Both inscriptions are in dropout white.

A tiny gray “2022” year date is printed in the bottom left corner.

Noyes shared with Linn’s Stamp News some of her experiences designing the stamp.

“I’ve had this assignment for years but wasn’t able to start working on it until the launch of the telescope finally took place,” Noyes said.

The Ariane 5 rocket carrying the telescope was launched Dec. 25, 2021, from Kourou, French Guiana. The telescope is currently in orbit around the sun, roughly 1 million miles from Earth.

“I started the design concepts in earnest in February 2022, before we had received any images from the telescope,” Noyes continued.

“I ultimately decided to make the stamp about …