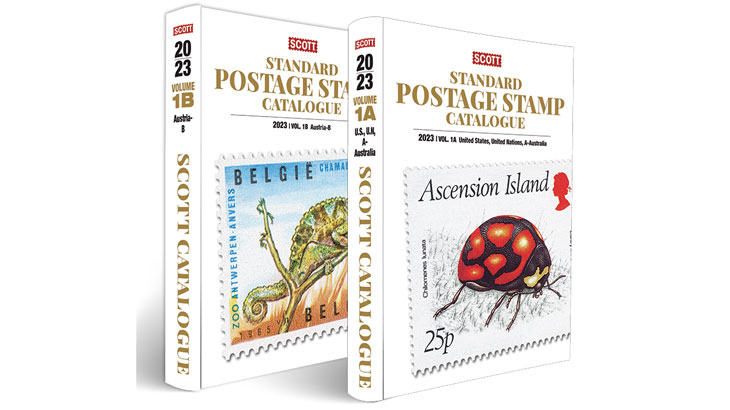 Volumes 1A (United States, United Nations, countries of the world A through Australia) and 1B (countries Austria through B) of the 2023 Scott Standard Postage Stamp Catalogue are now available for purchase.

Another catalog season is upon us as we continue the journey of the 154-year history of the Scott catalogs. The 2023 volumes are the 179th edition of the Scott Standard Postage Stamp Catalogue. Volume 1A includes listings for the United States, United Nations, and countries of the world Aden through Australia. Listings for Austria through B countries of the world can be found in Vol. 1B.

The time period in which we were working on this year’s catalog continued to be interrupted by the COVID-19 pandemic. In regards to new issues, stamps from some locations proved harder than usual to obtain with transportation issues worldwide. However, Scott catalog editors worked tirelessly to stay up to date as best as
possible.

As was true for the 2022 Scott Specialized Catalogue of United States Stamps and Covers, current auction results, dealer price lists and Scott catalog advisors’ input point to a stable market that overwhelmingly is in line with Scott catalog values. As always, there are exceptions that are noted by new values in the Vol. 1A United States sections. The exceptions generally are for scarce items that do not often appear in the marketplace.

Other scattered values in the classic period generally change by very small amounts, some higher and others a little lower. One winner is the unused 30¢ orange “F” grill (Scott 100), which jumps from $9,000 in 2022 to $12,500 in 2023. Some Banknote issues from the 1880s, which are difficult to find in very fine condition, see somewhat higher values assigned.

In the Air Post listings, some of the modern errors, both imperfs and color omitted, have new, lower values.

Some modern new issues, specifically se-tenant forever stamp issues, continue to see some dramatic increases even though a few of them might only be a few years old. Some of this activity could be caused by dealers not stockpiling new issues as much as in the past, combined with an increase in demand for some issues.

On the editorial side for the United States, the 2022 Vol. 1A listed three 1873-79 double paper varieties, but the 2022 U.S. Specialized catalog listed 14 of these scarce to rare important experimental printings. The other 11 such varieties, between Scott 156a and 191a, have been added to Vol. 1A as lettered minor listings.

In the more modern era, three new shade varieties have been added to the Washington-Franklin issues. These are Scott 442a, the 1914 2¢ lake coil with horizontal perfs; 474a, the 1916 12¢ copper red sheet stamp; and 512c, the 1917 12¢ claret red sheet stamp. The latter two stamps should not be difficult to find hidden in dealer stocks.

An important new find is the imperforate variety of the 1923 2¢ carmine sheet stamp from the Fourth Bureau Issue. It was believed to exist but had not been seen in decades. The sheet containing 13 imperf pairs plus part-perf varieties finally surfaced in 2021, and the imperf pairs are now listed as Scott 554e.

In the Confederate States, a new major number, Scott 55X2A, has been added for the Marion, Va., 10¢ black on bluish paper stamp. At this time, this item is unique.

Parcel post stamps for Algeria were added for the first time to the Vol. 1 catalog. These stamps, Scott Q1-Q225, comprise nearly six pages of listings and were a serious undertaking to organize and list. Values for Algerian stamps were also reviewed, and a mix of increases and decreases were noted.

Bolivia was reviewed with approximately 150 value changes. There were many increases for footnoted souvenir sheets.

Stamps of Albania were thoroughly pored over, and more than 800 value changes were made. A number of the changes were slight increases.

Belarus received a review with approximately 850 value changes made. Slight increases were noted for unused issues, and decreases were made for a number of used stamps that had previously been listed at the same value as an unused stamp.

Additional countries that were reviewed include Abu Dhabi and Bahrain.

Copies of the 2023 Scott Catalogue Volume 1 are available on AmosAdvantage.com in both print and digital formats.