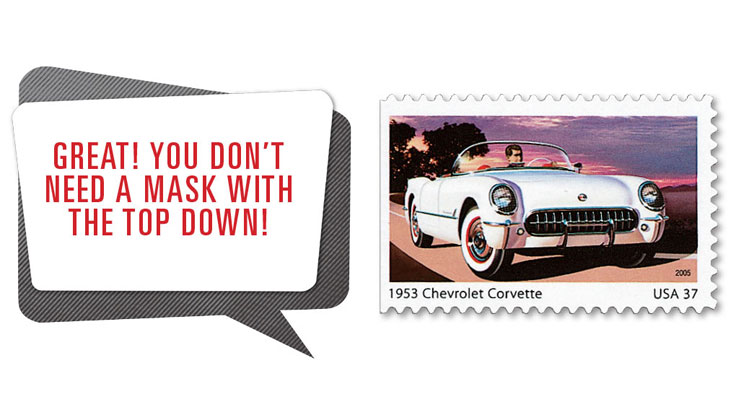 The challenge for the October cartoon caption contest was for respondents to put themselves in the driver’s seat of the 1953 Chevrolet Corvette on the 37¢ stamp issued Aug. 20, 2005, in the Sporty Cars of the 1950s issue (Scott 3933).

Many Linn’s readers speculated on the value of a 1953 Chevy Corvette compared to various philatelic gems, especially the 1918 24¢ Jenny Invert (Scott C3a).

Jerry Login of New York represents this group of entries with “It was worth trading my upside down Jenny for this beautiful Corvette as the Corvette will continue to go up in value, and the C3a may have topped out.”

Also popular as a theme was the idea of using the Corvette to deliver the mail. A clever line on this theme comes from Linda Gilmore of Chelmsford, Mass.: “The Pony Express had nothing on me. I can deliver the mail faster with all these horses!”

The increased price of gasoline stuck in the minds of many Linn’s readers.

For example, Deborah Rubin of Silver Spring, Md., sent this entry, “With this gas guzzler, we’ll never see the whole of the USA in our Chevrolet!”

The winner of the nonphilatelic line in the contest, Bob Bialo of Cary, Ill., used a COVID-19 pandemic theme.

On the philatelic side, the prize was won by Spike Savage of Presque Isle, Maine, with an entry that brings the scene into the current era and laments the price increases of nearly 70 years. Savage had the driver saying: “What’s happening? I can’t find the 18¢ per gallon gasoline station, and the Post Office wouldn’t let me mail my letters for 3¢.”

“Do I have to be a professional athlete to drive a sports car?” from George Schaetzle of Sheboygan, Wis.

“The sunset is even more spectacular with the air in my hair,” sent by William Gaugler of Coatesville, Pa.

“Fortunately, if I have any car trouble, the AAA stamp was issued just a few years ago,” sent by Bill Etter of Irvine, Calif.

“This is the narrowest road I’ve ever seen!” by Dave Schwartz of Commack, N.Y.

“What a novelty — a stamp with a grill on the front instead of on the back!” from Steve Kotler of San Francisco, Calif.

“This is my morale booster shot!” by Ted Feldstein of Doylestown, Pa.