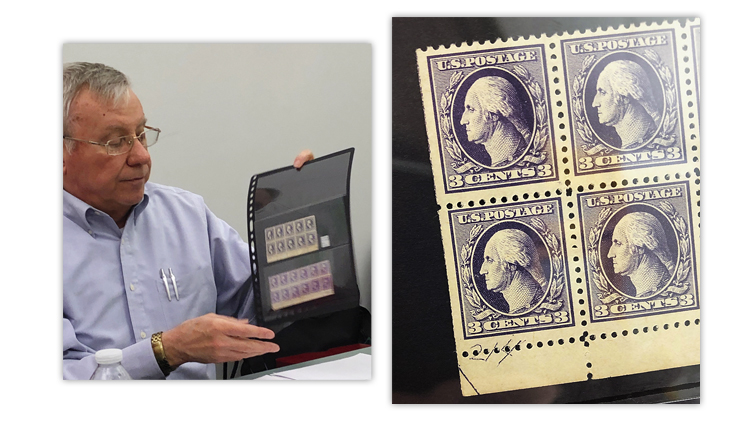 Chicago Philatelic Society member Jerry Nylander shows off a stock sheet of two blocks of United States George Washington stamps with markings in the selvage. In the close-up of one of the blocks, “214” and a diagonal line can be seen in the selvage below

The Chicago Philatelic Society meets in downtown Chicago on the third Thursday of each month in a conference room at the Harold Washington Library at 400 S. State St.

My schedule coincided perfectly with one of their meetings on March 21.

Prior to the meeting, club members get together at a local restaurant for a dutch treat dinner. About 10 club members attended the evening I went. I enjoyed partaking in all of the different conversations that covered a variety of philatelic subjects.

The meeting itself started promptly, and as many stamp club meetings do, it included a brief discussion of club business. The newsletter and the upcoming Chicagopex stamp show were among the topics discussed. The show will take place Nov. 22-24 at the Westin Chicago Northwest in Itasca, Ill.

One of the highlights for me was a presentation by Jerry Nylander, a member of the society and also the Chicagopex show chairman, on the subject “Unusual marginal markings on Washington Franklin stamps.”

I have to admit I learned a few items from Nylander’s talk. He passed around blocks of 3¢ George Washington stamps from the early 20th century that have markings in the selvage that don’t appear on all blocks. These markings were the result of press workers etching items on the plate.

At the end of his presentation, Nylander quizzed collectors on what they thought was unusual about one of the blocks. Everyone was so focused on the stamps, they completely missed the plate number in the selvage that was positioned in a way that the perforations split right through the middle. This variety only appeared on the first couple of plate numbers used for that George Washington stamp.

Overall it was an entertaining evening. For more information on the society, visit its website at www.chicagopex.org, www.facebook.com/chicagopex or Twitter @Chicagopex.